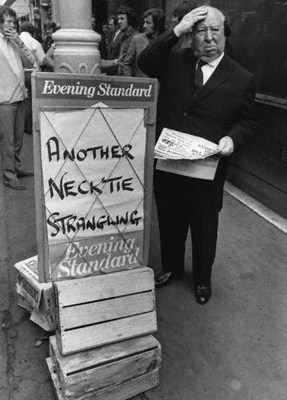 Past exhibition archive
Until 21 October 2007

Exhibition supported by the Patrons of the National Portrait Gallery. Additional support from Getty Images

Daily Encounters draws upon the rich and relatively neglected surviving archives of newspaper photography to tell two parallel stories - one of a powerful industry with an internal culture of its own, and the other of the often uneasy relationship that grew between public figures, the photographic press and the wider population of readers.

Placed within the context of the National Portrait Gallery, the exhibition explores the pictorial depiction, through newspaper photography, of Britain and Britishness, the creation of new forms of celebrity, and the scripting and constant redrafting of the rules of engagement between photographers, editors and the subjects of their insatiable gaze. Newspaper photographs of politicians, jockeys, gangsters, models and actors are interwoven with images of the industry itself; the owners and editors, newsrooms and printing presses, photographers and journalists as they hunted and gathered stories, both alone and in packs.

Daily Encounters sets out to reposition the press photograph within the domain of the Gallery while relating the story of newspaper photography as one very particular strand of Fleet Street journalism. It covers the period from photography's first appearance in newspapers in the early years of the twentieth century through to the demise of Fleet Street in the mid-1980s. The photographs plot the arc of 80 years of history while the narrative is inexorably drawn towards the tussle over the iconography of public figures, both the politically established and the transiently famous. The staple diet of the popular press quickly emerges: royalty, politicians and sports stars, spiced by the added relish of vice girls, acid-bath murderers and big-time pools winners. But lurking in the shadows are the real stars of the exhibition, the press photographers themselves.

The exhibition shows how press images became some of the most socially inclusive forms of photography, counterpointing images of celebrities and the ruling aristocracy with those of ordinary people, often made by photographers of their own social class. The blend of photographs, headlines and clearly-written copy proved a potent mix, and circulation among the broad swathe of wage earners rose steadily. The popular press catered to a new generation equipped with the basic skills of literacy which sprung up in Britain as a result of universal schooling implemented after the 1870 Elementary Education Act.

With over 75 works arranged broadly chronologically, Daily Encounters shows how newspaper photography quickly changed the opinions and tastes of a mass audience. This progression was echoed by the historian Eric Hobsbawm, who wrote: 'For the twentieth century, it was increasingly clear, was the century of the common people, and dominated by the arts produced by and for them. And two linked instruments made the world of the common man visible as never before and capable of documentation: reportage and the camera.'

This new democracy in readership and press personnel brought startling contrasts between the approaches of some press photographers and established society photographers such as Cecil Beaton who was forever seeking to distance himself from the rank and file 'pressman'. In his diaries of the Second World War Beaton recounted how, when documenting the impact of the Blitz on London, he had carefully framed St Paul's in the smoke and ruins of a burnt-out shop: 'Through the arch could be seen, rising mysteriously from the splintered masonry and smoke, the twin towers of the cathedral. It was necessary to squat to get the archway framing the picture. I squatted. A press photographer watched me and when I gave a surly look, slunk away.' Added to this imagined insult came professional injury, for when Beaton returned 'from lunch with my publisher, my morning's pictures still undeveloped in my overcoat pocket, I found the press photographer's picture was already on the front page of the Evening News'.