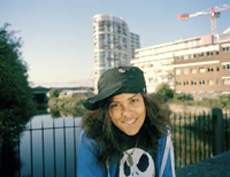 My Space is an exhibition of work by young people from across London exploring ideas around buildings, places and identity.

During the summer, groups of young people from Tower Hamlets, Newham and Camden have worked on the My Space project with architects, artists and National Portrait Gallery staff to make their own work for display in the Studio Gallery. The participants used portraits in the Gallery's Collection as a starting point for exploring ideas around identity and the built environment, considering how public spaces influence behaviour and identity, and how buildings can play a symbolic role in portraiture.

All of the groups involved have had special visits the National Portrait Gallery to learn more about the Gallery's Collection, as well as having the opportunity meet an architect and learn more about public spaces in their area. 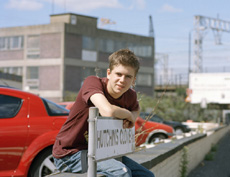 The young people have worked with artists to create a vibrant range of responses to the project themes, including graffiti, photography and an audio installation.

The groups involved in the My Space project are:

In the London Borough of Tower Hamlets a group of students from the St Paul's Way Community School have worked with graffiti artists Aerosolics to create impressive large-scale portraits in their school grounds. Sections of the portraits will be displayed in the exhibition along with time-lapse photography of the young artists in action. As one of the first schools to be rebuilt under the Building Schools for the Future programme, buildings and spaces are a very pertinent issue for this group of young people, and this project has given them the opportunity to creatively explore the associated issues. 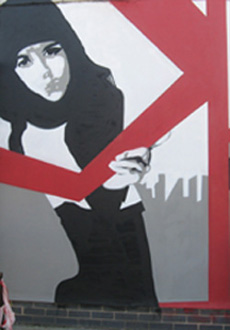 Meanwhile in Stratford ­ the heart of the Olympic project ­ members of The Architecture Crew worked with photographer Lianne Harris and architect Nick Edwards to reflect on the rapid rate of change to their local area. The photographic portraits they produced are an insightful look at the relationship between young people in Newham and the high specification, high rise homes being built in the area.

Photographs from the National Portrait Gallery that have inspired the young people's work are also on display.

The exhibition project has been developed in partnership with the education team at the Commission for Architecture and the Built Environment, the government's advisor on architecture, urban design and public space. The aim of CABE's educational work is to ensure that young people understand the value of well-designed buildings and spaces. CABE supports a national network of learning professionals and organisations working in the field of built environment education and promote the built environment as a learning resource.