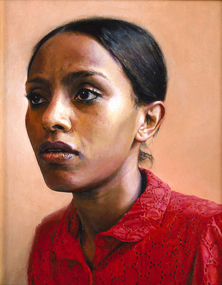 The BP Portrait Award is the most prestigious portrait competition in the world, promoting the very best in contemporary portrait painting.

An annual competition aimed at encouraging artists to focus upon and develop the theme of portraiture in their work, the Award is open to everyone aged 18 and over in recognition of the outstanding and innovative work currently being produced by artists of all ages. With a first-prize of £25,000 the exhibition has proved the launch pad for the careers of a number of successful portrait artists.

On Monday 16 June the winner of the BP Portrait Award 2008 was announced by Ian Hislop at the National Portrait Gallery. In a record-breaking year for entries from non-UK artists, the prestigious first prize was won by 35-year-old London artist Craig Wylie. His winning portrait, K (oil on canvas, 2100 x 1650 mm), is an epic study of his girlfriend Katherine Raw based on sittings at his Hackney Wick studio. Craig wins £25,000 and a commission, at the National Portrait Gallery Trustees' discretion, worth £4,000.

The second prize of £8,000 goes to Simon Davis for Portrait of Amanda Smith at Vincent Avenue and the third prize of £6,000 goes to Robert O'Brien for Hannah O'Brien.

There is, also for the second time, a BP Young Artist Award of £5,000 for the work of an entrant aged between 18 and 30. This has been won by Peiyuan Jiang for Untitled.

This year, nearly 1,750 artists from around the world submitted their work and the resulting exhibition presents 55 works.

This year's exhibition features a selection of work by the two BP Travel Award 2007 winners - Timothy Hyman and Gareth Reid. The Award, which looks to offer artists the opportunity to experience working in a different environment, in Britain or abroad, on a project related to portraiture, is open to all artists selected for the exhibition.

Hyman's studies of a unique group of Indian artists he first met in the 1980s will be displayed alongside Reid's portraits of members of the Scandinavian 'vinterbaderklubs' (winter-bathing clubs) who regularly swim in man-made ice holes.

Our commitment to the work of young artists continues with the inclusion in this year's exhibition of a special award for entrants aged between 18 and 30.

The judges have made their choice, now it's your turn! Each year, the exhibition offers visitors the opportunity to judge for themselves which portrait they think is the best. In 2007, over 5,500 people registered their vote, with Hynec Martinec's Zuzana in the Paris Studio proving the most popular overall.

Let us know which is your favourite portrait in the exhibition and if it matches the overall visitor choice winner you will be entered into a prize draw to win a pair of tickets and the accompanying book for the forthcoming exhibition, Annie Leibovitz: A Photographer's Life, 1990-2005 (16 October 2008 - 25 January 2009), and a meal for two in the spectacular roof-top Portrait Restaurant.

Simply visit the exhibition, choose your favourite portrait and fill in the Visitors' Choice form to register your vote.