A Revolution in female manners 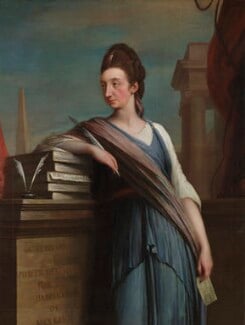 At the end of the eighteenth century, the political and social situation became more repressive in Britain in the wake of the American and French Revolutions. Until the end of the Napoleonic Wars in 1815, Britain experienced increasing economic and political insecurity. This joined with radical opposition to the government at home to result in a conservative backlash which halted the slow move towards equality between the sexes.

With greater restrictions imposed on personal freedom, the final section of the exhibition considers the changing fortunes of the intellectual and creative woman. A Revolution in Female Manners explores the rise and fall of two writers - the republican historian Catharine Macaulay and the early 'feminist' Mary Wollstonecraft. Both held radical beliefs, greeted the French Revolution with enthusiasm and spoke out for women's rights. But their troubled reputations were due not only to their uncompromising politics, but also to their rejection of traditional female behaviour, especially in their liberal attitudes, publicly-voiced political opinions and unconventional sexual lives. But the contemporary moral climate saw new limits placed on female self-expression and the traditionally demarcated roles of the sexes were emphasised once again.

The republican historian Catharine Macaulay was one of the leading political activists of her times. Her eight-volume History of England, published between 1763 and 1783, and many political tracts contributed to the radical programme for political reform. With the rise of radical political ideas and unrest in Britain's American colonies she and her supporters used a variety of media to establish her as a spokesperson and figurehead of the radical cause in the 1760s and 1770s. In several cases, these portraits likened Macaulay to potent historic male figures such as the Emperor Brutus or a Roman senator. This was the case with Robert Edge Pine's (1730-88) political portrait that was painted around the start of the American War of Independence in 1775. This shows the statuesque figure of Macaulay, posed in a Roman Forum-like setting and leaning on a marble plinth, topped with volumes of her History, and incised with the republican inscription: GOVERNMENT/ A POWER DELEGATED/ FOR THE HAPPINESS/ OF/ MANKIND. She also wears a Roman 'stola' with a purple sash - the distinctive emblem of an elected Roman Senator, although as a woman she could never hold such office. 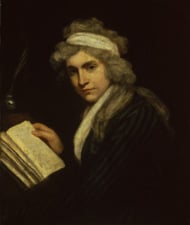 Such a transgression of gender boundaries and accepted female manners led eventually to Macaulay's fall from favour, but this was not before a profound shift in the political landscape. The turning point was the American Declaration of Independence in 1776. For Britain this was perceived as a national disaster and open support for an independent America became increasingly difficult. Remaining staunchly republican and becoming increasingly vain and indiscreet in her personal life, Macaulay was subjected to vicious satire. As the exhibition reveals, her public reputation was most severely affected when the forty-seven year old historian eloped, in 1778, with the twenty-one year old brother of her 'quack' doctor. This inevitably led to accusations that she had abandoned her intellect and principles for lust. Elizabeth Montagu was concise in her analysis of the situation: 'All this has happened from her adopting masculine opinions and masculine manners. I hate a woman's mind in men's cloaths I always look'd upon Mrs Macaulay as rather belonging to the lads. Indeed she was always a strange fellow.'

The scandal of Macaulay's second marriage irrevocably damaged her reputation yet she continued to publish. Most notable was her Observations on the Reflections of the Rt. Hon. Edmund Burke (1790) which was a riposte to Burke's conservative reaction to the Revolution in France and the dire consequences, in his view, for Britain. Macaulay's Observation ' s encouraged the young writer Mary Wollstonecraft to send her a bold and unsolicited letter proclaiming: 'You are the only female writer who I consider in opinion with respecting the rank our sex ought to attain in the world. I respect Mrs Macaulay... because she contends for laurels whilst most of her sex only seek for flowers.' While this final sentence of the letter captures the spirit of these two writers' shared interest in promoting a new model of assertive womanhood, Wollstonecraft's principle excuse for writing to Macaulay was to send a copy of her pamphlet A Vindication of the Rights of Men (1790), which like Macaulay's Observations was her own recently-published reaction to Edmund Burke's Reflections on the Revolution. 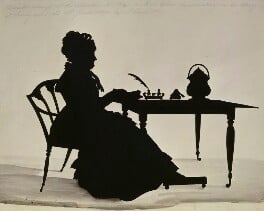 Wollstonecraft is now considered one of the founders of modern British feminism. In political writing, social treatises and novels she made a powerful case for emancipating women from subordination though education. This sensitive and confident portrait by her friend John Opie (1761-1807) depicts Wollstonecraft in the year before the publication of her most famous work: A Vindication of the Rights of Woman (1792). In this she argued that English women had been forced into narrow roles within society, denied access to education and trivialized as frivolous creatures whose purpose was only to please men. She even suggested that women were instrumental in their own subordination due to their love of sentimental novels, fashion and gossip. Arguing that it was serious study that would lift women from sensation to intellect, Wollstonecraft's rallying cry was aimed at the radical reform of Britain as a whole:

It is time to effect a revolution in female manners - time to restore them their lost dignity - and make them, as part of the human species, labour by reforming themselves to reform the world.

Wollstonecraft's ideas were rooted in her belief in 'perfectibility', the theory that people can achieve perfection through their own actions. Her work was also based on a 'levelling' principle which took its inspiration from the French Revolution. Both were contentious positions to adopt and yet it took sometime for a full-scale conservative backlash to develop against A Vindication of the Rights of Woman. In part this was due to the fact that most people judged it as an 'elaborate treatise on female education '. It was only the extremist Critical Review which correctly identified the revolutionary implications of Wollstonecraft's proposals, and voiced anxiety about the social impact if women -when educated to the level of men -refused to continue in their allotted duties of childcare and nursing the sick.

Despite the relative success of A Vindication of the Rights of Woman, the book and its author would soon become synonymous with libertarian immorality and radical politics. The reasons for Wollstonecraft's plummeting reputation are several. They include the increasingly repressive nature of the social and political situation and the public discovery of the details of her private life. Four months after Wollstonecraft's gruesome death in childbirth, her devastated widower, the philosopher William Godwin (1756-1836), published his Memoirs of the Author of a Vindication of the Rights of Woman (1797). Representing his wife as a passionate and intellectually assertive woman, Godwin revealed intimate and previously unknown information about her troubled life: her illegitimate child and life out of wedlock with one man, her attempted suicide, her pregnancy before marrying Godwin and her refusal of Christian rites on her death-bed. Combined with her obvious political beliefs, Godwin's overly-frank Memoirs ruined Wollstonecraft's reputation for the generations to come. In the most reactionary press, she was branded a 'philosophical wanton' and her life was turned into an example of revolutionary immorality in action.

One vehement exponent of this sentiment was the Reverend Richard Polwhele (1760-1838) who published The Unsex'd Females (1798) a long anti-revolutionary poem against independent-minded, radical feminist writers. Using the emotive label 'unsex'd' to suggest that such people gave up their right to be respected as women, Polwhele named and shamed eight women who he believed had violated their gender by abandoning 'natural' modesty, displaying French sympathies and criticising Britain's social, political and religious institutions and calling for equal rights. Chief among Polwhele's 'unsex'd females' was 'Wollstonecraft, whom no decorum checks/ the intrepid champion of her sex'. Polwhele is an extreme example of the growing hostility towards intellectual women that emerged in the early decades of the nineteenth century. Nevertheless Polwhele was not opposed to female learning in total. He praised several of the original Bluestocking Circle for their respectability and Hannah More, who had become a prominent evangelical Christian writer, was represented as the essence of 'seraphic', or angelic, femininity.

The elderly Hannah More is represented here by a silhouette which depicts her seated at her desk with ink pot and tea set. Sometimes called the 'Bishop in petticoats', since her conversion to evangelical Christianity she had turned her pen to promoting the abolition of slavery and the increase of public morality and piety. Along with numerous conduct books, educational primers and novels, her series of 'Cheap Repository Tracts' sold millions and made More a household name. Through simple homilies and stories about devout but upwardly mobile heroes, such as Betty Brown, the St Giles Orange Girl, these tracts aimed to reform the poor and thus diffuse the predominantly middle-class fear of a popular uprising inspired by events in France. No supporter of women's rights, More believed that female subordination was god-given. Instead she called on women to use their influence for the national good arguing that as 'charity is the calling of a lady; the care of the poor is her profession'. More gave women a central role as agents of the philanthropic action that would 'raise the depressed tone of public morals' and 'reanimate the dormant powers of active piety'. As the nineteenth century progressed, such philanthropy became a new and effective form of domestically-based female activism and empowerment.

Despite the fact that eighteenth-century bluestockings made a substantial contribution to the creation and definition of national culture, their intellectual participation and artistic interventions have largely been forgotten. By the end of the eighteenth-century the combined social and intellectual prominence of so many intelligent women began to be greeted with suspicion and disgust. The most vociferous attacks on bluestockings came from the leading male Romantic writers who wished to protect their status and success. The literary critic William Hazlitt (1778-1830) declared that he did not 'care a fig for any woman who even knows what an author means.' While the best-selling Lord Byron (1788-1824) famously ridiculed the poet Felicia Dorothea Hemans -who often outstripped his popularity and his sales 'by moaning uncharitably, she should 'knit bluestockings instead of wearing them.' With openly intellectual women once again viewed with suspicion and scorn 'bluestocking', so recently a mark of distinction, became a term of insult and ridicule.