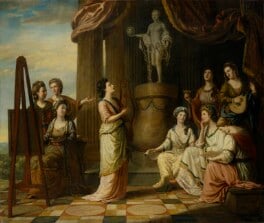 Exhibition: Introduction| The Bluestocking Circle| A Revolution in Female Manners

Following British victory in the Seven Years War (1756-63), the mid-eighteenth century was a time of growing cultural, commercial and national pride. This shaped the popular perception both of the Bluestocking Circle and of learned women more generally. By exploring fine art along with various commemorative items and other widely circulated commercial material such as engravings and commemorative ceramics, Celebrating Modern Muses reveals how creative and intellectual women were, for the first time, celebrated patriotically and used as symbols of Britain's sense of international superiority and sophistication.

Ancient history and mythology had long been invoked to justify contemporary behaviour. In this manner, a positive view of modern female creativity was often made by reference to the nine Muses of Classical Antiquity. These sister goddesses, who each embodied one of the arts or sciences, increasingly appeared in literature, portraiture and the decorative arts as powerful examples of what women might achieve. The fashion for linking contemporary women with the Muses reached its peak between the 1760s and the 1780s and coincided with the debate about whether the nine Muses merely provided inspiration to men practising the arts and sciences or could also represent active female creativity. Consequently, the nine Muses became a means through which Britain could celebrate the special contribution that women made to the social and cultural progress and economic well-being of the nation - a matter that had been brought to public attention in the philosophical works of Scottish Enlightenment thinkers such as David Hume (1711-76) and Adam Smith (1723-90). 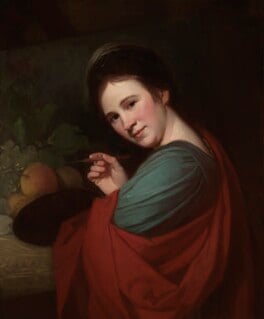 Britain's creative and intellectual women were nowhere more triumphantly celebrated than in Richard Samuel's (d.1787) unusual Portraits in the Characters of the Muses in the Temple of Apollo (1778). This large painting, which is nearly a meter and a half in length, depicts nine contemporary creative women dressed in classical-style robes with various emblems that associate them with specific Muses. They are gathered in a 'Temple of Apollo', beneath a monumental statue of the god who was the presiding deity of the arts. They are thus presented as members of a modern and female pantheon of arts and letters.

Samuel's painting, it seems, was a speculative venture by a young artist who was hoping to cash in on the current interest in the Muses to further his own ambitions as a 'Portrait and History Painter'. Not surprisingly then, the artist did not take sittings for the portrait and the identities of each member of this idealised group can only be established from the engraving published around the same time. A network of writers, scholars, artists and performers: all the women included, with the exception of Elizabeth Montagu, the literary critic and bluestocking hostess, earned a living from their work. The patriotic implications of pairing named creative women professionals with the Muses were further reinforced by the print. This was published under a different title: The Nine Living Muses of Great Britain (1778). It showed these 'living' Muses sacrificing not to Apollo but to a sculpture of Britannia. Samuel's work thus extolled the contribution of female professionals to the 'sister arts' and encouraged modern British women to identify with them and aspire to their achievements.

While the allegory of the Muses helped celebrate the idea of the creative woman, fame and notoriety remained fraught for individuals. Writers and artists could lead lives more private than actresses and singers, but still they had to demonstrate that their professional lives did not compromise the moral and social expectations of their sex. This tension is apparent in the famous and previously unknown portraits in this section which indicate some of the strategies employed professional creative women to promote their work and reputation in the male-dominated world of arts. 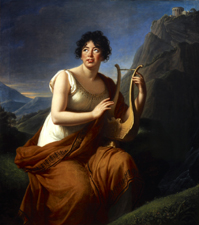 The earliest work on display is a portrait of the classical scholar and poet Elizabeth Carter as Minerva (c.1735-41), which was rediscovered during the research for this exhibition. One of the founders of the Bluestocking Circle and widely revered as Britain's greatest female intellectual, Elizabeth Carter had been a prodigy. Aged about seventeen she had moved to London to establish her literary and scholarly career working as a writer for the Gentleman's Magazine. Although Carter preferred to publish anonymously, her exceptional youth, talent and gender encouraged the magazine's publisher Edward Cave (1691-1754) to promote her as a sensation. This portrait by the hack artist John Fayram (active 1727-43) formed an unusual part of that campaign when, in 1741, Cave published a eulogy entitled 'On Miss CARTER's being drawn in the Habit of Minerva, with Plato in her Hand'. This poem alerted readers to the portrait which shows Carter as Minerva the virgin goddess of wisdom - who has laid aside the spear she usually carries in favour of a copy of Plato. This reiterates the depth of Carter's intellect and discounts any suggestion that the chosen allegory of Minerva is just empty role play. Addressing itself to Carter, the poem in the Gentleman's Magazine thus exalted:

Well chose thy friend this emblematical way
To the beholders strongly to convey
Th'instructive moral, and important thought
Thy works have publish'd, and thy life has taught

The poem asserted that Minerva was an 'apt disguise' for Carter because both she and the goddess personified a combination of intellect, virtue and chastity. Together the poem and the painting reveal how Carter was presented as a moral role model for learned and creative professional women in the public eye.

During the eighteenth-century a surprising number of women, with a talent or vocation, turned to writing, or to a lesser degree painting, as a way to earn a living. Typically, writers and artists attempted to advance themselves by constructing identities that were at once genteel and professional. As there was no female tradition to follow many women who wished to be portrayed as respectable professionals had to adapt the conventions of male portraiture. This can be seen in several examples in the exhibition including George Romney 's (1734-1802) portrait of Mary Moser (1744-1819).

Along with Angelica Kauffmann, Mary Moser was one of only two female founding members of the new Royal Academy in 1768. Although she specialised in flower-painting, which was at the bottom of the hierarchy of academic art, Moser's ambition for professional standing is nevertheless conveyed in this portrait which shows her at work on an oil painting. By placing her at an easel, dressed in generic painter's robes, it refers to a tradition of portraits of (male) artists dating back to the Renaissance. But at a time when most male artists asserted their academic status by stressing the intellectual rather than the technical aspects of their work, the oil palette that Moser holds also distinguishes her from the many women amateurs who practiced flower-painting in the less taxing medium of watercolour. The close focus, dramatic colours and sidelong glance also emphasised that her professional status did not need to compromise her femininity.

All of the creative professional women in this exhibition made significant contributions to their own fields - whether history, criticism, educational theory or portrait painting. In None were as influential as the Swiss-born novelist, critic and political writer Germaine de Staël (1766-1817). An outspoken opponent of the prevailing regime, she was exiled from her home in France by Napoleon after publishing works that promoted political and creative freedom. Napoleon's edict led to a ten-year exile during which de Staël travelled widely and wrote a number of books, the most important of which was Corinne, or Italy (1807). A combination of romance, social commentary and picturesque travel narrative, Corinne is the story of an extraordinary, free-thinking woman who does not accept the submissive role allotted by society. The heroine is a poet, writer, performer and beauty who is introduced to the reader as the 'most celebrated woman of Italy', about to be crowned for her genius before ecstatic crowds - who shout: 'Long live Corinne ! Long live Genius. Long live Beauty.'

While Corinne may be a thinly veiled self-projection of its author, Elisabeth Vigée-LeBrun 's (1755-1842) painting of Madame de Staël as Corinne (1809) is an overt assertion that the two figures are one. On meeting de Staël, the artist was captivated by her animated conversation and formidable personality. 'To tell you the truth', Vigée-LeBrun wrote, 'one cannot paint you as one paints everyone else.' The result of their encounter was this monumental and daring rendition of an author portrayed as her own literary heroine which takes direct cues from the novel. De Staël is posed as Corinne, dressed in the style of ancient Greece, her eyes turned heavenwards in a state of inspiration reciting a poem to the tune of her lyre.

When de Staël received the portrait she wrote to the artist: 'I finally received your magnificent painting and without thinking about the fact that it is my portrait, I admired your work. All your talent is there and I very much wish that mine could be encouraged by your example.' But if de Staël found it hard to be merged with her most uncompromising of creations, both Corinne and the portrait became inspirational emblems of female creativity and intellectual strength. In the following decades, the 'lady with the lyre' became a popular convention for portraying European women with any poetic or literary ambitions. Corinne's inspiration was also strongly felt among a group of English women writers. These included Elizabeth Barrett Browning (1806-61), Charlotte Brontë (1816-55) and Felicia Hemans (1793-1835) who wrote that Corinne 'has a power over me which is quite indescribable; some passages seem to give me back my own thoughts and feelings, my whole inner being.' And in the margin of her copy, Hemans simply penned, 'C'est moi', thus identifying herself with the ultimate empowered Romantic heroine of the age.