The exhibition begins by introducing the fashionable Bluestocking Circle and exploring how a tight-knit group of women became a model for rational 'Enlightenment' forms of sociability. The Bluestockings met in the London homes of the fashionable hostesses Elizabeth Montagu (1718-1800), Elizabeth Vesey (c.1715-91) and Frances Boscawen (1719-1805) from the 1750s. Together these women, and the eminent men who supported their endeavours, invented a new kind of informal sociability and nurtured a sense of intellectual community and potential. Guests included the leading literary, political and cultural figures of the day, including the scholar and classical translator Elizabeth Carter (1717-1806), the critic and writer Samuel Johnson (1709-84), the artists Frances Reynolds (1729-1807) and her brother Sir Joshua (1723-92), the novelist Fanny Burney (1752-1840) and the writer and dramatist Hannah More (1745-1833). They got their comical name - 'Bluestockings' - when another guest, the botanist Benjamin Stillingfleet (1702-71), was welcomed at one of Elizabeth Montagu's salons even though he had arrived absent-mindedly wearing the blue woollen stockings normally worn by working men, instead of the more formal white silk.

The delicate balance of fashionable and intellectual polish normally required by bluestocking society is conveyed in a letter from Hester Thrale (1741-1821) to Fanny Burney where she marvelled that the bluestocking hostess and Shakespeare critic Elizabeth Montagu was 'Brilliant in diamonds, solid in judgement, critical in talk'. The mezzotint that reproduces Sir Joshua Reynolds 's now-lost portrait conveys the legendary elegance, poise and style that, along with great wit and patronage, led Samuel Johnson to name Montagu the 'Queen of the Blues'. 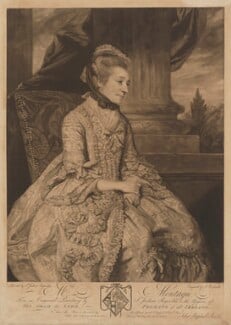 This affectionate title also reflects the growing fame of Montagu's bluestocking salon, which became increasingly grand and opulent especially in the 1780s. This was when she moved to her new Portman Place mansion that she described as her 'temple to Virtue and friendship'. Despite Montagu's unparalleled wealth, other more modest bluestocking hostesses were also celebrated for their hospitality and social skills.

In 1786, the poet and playwright, Hannah More published her poem Bas Bleu; or, Conversation (the title is French for 'blue stocking'), which she dedicated to Mrs Vesey. Vesey was another bluestocking hostess, who was known to her friends as the 'Sylph', because of her girlish figure, flirtatious wit and elusive spirit. In the poem, Hannah More celebrated the 'electric' quality of bluestocking debate and described the moral and educational goals of bluestocking sociability in forming a new space for learned women, in which 'our intellectual ore must shine'. In a period when educated discussion was taken as an index of civilised society, Hannah More proclaimed conversation to be 'That noblest commerce of mankind/ Whose precious merchandise is MIND!'

The Bluestocking Circle may have started out as a coherent London-based group, but in the 1770s and 1780s the bluestockings developed into a broader social and literary network in which friendship, charity and female education were celebrated as the foundation of modern civilised society, both in London and the regions. The poet Anna Seward (1742-1809), known as the 'Swan of Lichfield' was, for example, a leader of provincial polite society and a national literary figure. While the story of Elizabeth Montagu and Hannah More's patronage of Ann Yearsley (bap. 1753, d. 1806) the Bristol 'milkmaid' poet, is an instance when bluestocking ideals straddled the social divide. The episode which began as a charitable enterprise, ultimately ended in scandal when the independent-minded Yearsley accused Hannah More of fraud when she retained management of the profits from the milkmaid's book.

Networks of friendship, mutual support, intellectual encouragement and professional patronage were key elements in the foundation of bluestocking culture and identity from the outset. One of the most unusual and precious objects in this exhibition is a small, enamel and gold 'friendship box' of about 1740. This commemorates the intense emotional bonds between four youthful bluestocking friends: Margaret Cavendish (Harley), Duchess of Portland (1715-85), who commissioned the box; Elizabeth Montagu, her young friend; Mary Delany (1700-88), who is most famous for her intricate and accurate botanical collages now in the British Museum and, we believe, the amateur artist Mary Howard, Lady Andover (1717-1803), to whom the Duchess of Portland left the box in her will. All four portraits are mounted in an intricate enamel and gold setting that reflects the close connection between these young women, bound together by their shared interests in natural history, literature and the arts - subjects that they discussed in a lifelong correspondence.

While the term 'bluestocking' was first associated with the intimate social groupings that met at the salons of Montagu, Vesey and Boscawen, by the 1770s the name came to apply to learned women more generally. This larger eighteenth-century resonance, which is investigated in the next section of the exhibition, stands testament to the high profile that bluestockings achieved in an age when women had few rights and little chance of independence.