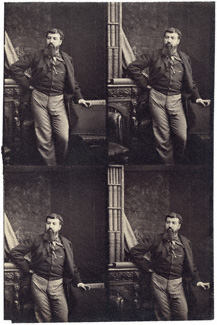 Camille Silvy was one of the photographic pioneers who burst on the scene in the 1850s.

The great photographer Nadar described him as one of photography's ‘primitives' and a ‘zélateur' or enthusiast. Silvy was born in 1834 in Nogentle-Rotrou, about forty miles west of Chartres, trained in law and became a diplomat.

Silvy took up photography as an amateur in 1857 and his work was first exhibited in 1858. He gave up his career in the French diplomatic service, moved from Paris to London, and set up a portrait studio in fashionable Bayswater, just north of Hyde Park. Silvy met and married Alice Monnier in 1863.

Portraits of Silvy capture his passionate horsemanship and dashing presence. He portrayed his wife on many occasions, dressed in the most elegant fashions. Silvy's self-portraits show him posing in his studio or in impressive fancy-dress. The most characteristic self-portrait presents him four times over: Silvy - like Andy Warhol a century later - made his studio a factory. 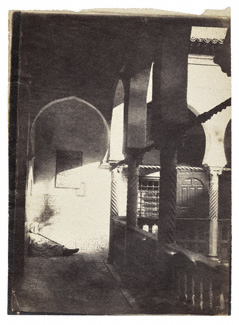 Algiers: The Hashish Smoker on the Balcony, 1857
Private Collection, Paris

While still a diplomat, Silvy visited Algeria in 1857 on a commission from the Minister of Public Instruction to draw buildings and scenes. He later confessed that ‘when I realised the inadequacy of my talent in obtaining exact views of the places we travelled through, I dedicated myself to photography and ... concentrated especially on reproducing everything interesting - archaeologically or historically - that presented itself to me'.

Two of the photographs are shown here. On returning to France, Silvy studied with an innovative amateur, Count Olympe Aguado. Silvy photographed the countryside around Nogent-le-Rotrou. His rural subjects included a self-portrait with a local priest. These rural photographs were shown in the first exhibition devoted to photography as a fine art, held in Paris in spring 1859. 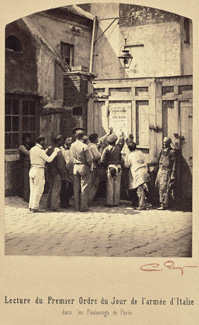 Reading the Emperor's First Order of the Day to the Army for the Italian Campaign in the districts of Paris, 1859
Private Collection, Paris

River Scene, France and 'The Emperor's Order of the Day'

The climax of Silvy's photography of his native countryside was ‘River Scene, France' or ‘La Vallée de l'Huisne', from the summer of 1858. The river Huisne runs through Silvy's birthplace, Nogent-le-Rotrou.

Silvy's subject, modern leisure at the edge of town, became popular with Impressionist painters a decade later. Silvy's next tableau presented an important moment in French military history. Napoleon III led his army to Italy to drive out the Austrians.

After arriving in Genoa, the Emperor wrote out an Order of the Day for his army. The text was telegraphed to Paris, printed up overnight and posted in the streets of Paris the next morning. The proclamations showed that although the Emperor was away he was still in control of the volatile capital.

The Streets of London

In summer 1859 Silvy established his London studio in Bayswater on the north side of Hyde Park. He chose this location because he was a keen and knowledgeable horseman and wanted to make equestrian portraits. The poet Baudelaire, in his famous essay ‘The Painter of Modern Life' (1863), recommended sleek carriages and smart grooms as a subject for modern artists.

Silvy also responded to what the novelist Henry James called ‘the thick detail of London life'. He became entranced by the light effects in the capital's streets. In this section, three tableaux - ‘Sun', ‘Twilight' and ‘Fog' - comprise his highly original series Studies on Light from autumn 1859. All sorts of special effects and manipulations were required to create the illusion of fog and twilight. It is likely, for example, that four separate negatives were combined to produce Twilight. This picture includes perhaps the first ever deliberate use of blur in a photograph to suggest movement. 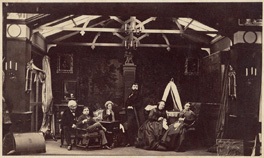 Silvy in his Studio with his Family, c. 1866
Private Collection, Paris

Silvy's studio occupied a house at 38 Porchester Terrace, Bayswater, which is still standing, and the yard behind it (now built over). The yard was used to print out the photographs by sunlight. The reception rooms were grandly appointed, with tapestries, choice furniture, sculptures and Old Master paintings. There was a dressing room in which to prepare for a sitting and the ‘Queen's Room' was created to welcome the monarch if she were ever to come to sit for Silvy. She did not but sent her family and friends.

Generally, two poses were recorded, three times each, on one glass negative. When the sitter had chosen which they preferred, the portraits would be printed, gold-toned, trimmed, mounted on card and dispatched by post. Over 17,000 portraits were made here between 1859 and 1868, and over a million prints produced for sale.

Portraits of actors and actresses became popular in the 1850s. When Silvy opened his London studio, he sought out stage performers. They needed portraits to sell to fans and Silvy needed sitters. The tactic worked, launching Silvy's studio and spreading his fame.

Silvy began working with London's resident theatricals but soon he photographed one of the greatest international operatic stars - Adelina Patti. He portrayed Patti in many of the roles she performed at Covent Garden and she brought the best out of his talent.

Although Patti sometimes seems to be caught by Silvy's camera in mid-aria, all of his theatre portraits were made in the studio. Given the cumbersome cameras and relatively slow exposures of the period, only studio lighting - natural light, controlled by a system of blinds - provided Silvy with the conditions he required. 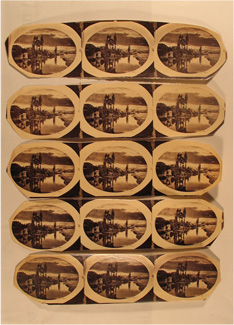 Silvy set up a Librairie photographique in 1860. This was envisaged as a series of photographic facsimiles of illuminated manuscripts. The Manuscrit Sforza was published in two volumes in 1860. Silvy wrote an introduction and set out a typically bold claim for photographic reproduction. He argued that the medium of photography could not merely reproduce manuscripts but also appear to restore them. This was because the standard photographic medium of the time, the wet collodion process, recorded yellow as black.

Another early commercial venture was the reproduction of paintings by Sir Peter Lely at Windsor Castle. These were published as an instalment of Silvy's magazine , the London Photographic Review - another of his publishing ventures - in 1860. 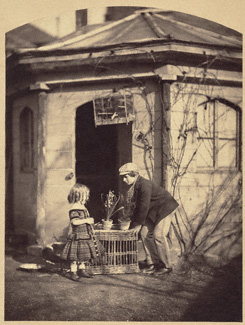 Silvy wound up his London studio in 1868 but may have taken his last portraits in 1867. There were several reasons for selling up. He was often unwell in London's coal-smoke-laden atmosphere; he had expended huge amounts of energy on photography and become wealthy; the craze for carte-de-visites had waned and perhaps he wanted to resume his diplomatic career.

In spring 1867 Silvy demonstrated a new photographic system he had designed to record battlefields. From the middle of the Champs Elysées, in the heart of Paris, Silvy produced a panoramic photograph which made the French capital look - prophetically - like a battlefield.

In 1874 he succumbed to what would later be termed manic-depression and spent most of the rest of his life in psychiatric hospitals until his death in 1910. His friend Nadar remembered Silvy in a memoir published in 1889: ‘This photographer and his studio ... had no equals'.