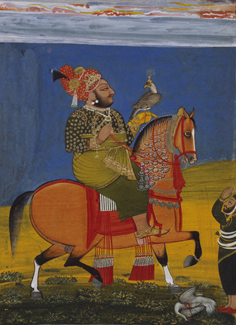 This outstanding exhibition, the first of its kind in the UK, tells the story of the Indian portrait over three centuries, exploring the fascinating ways in which Indian artists have approached the depiction of the human form and the changing role of portraiture in Indian history. Bringing together 60 stunning works from international collections, the exhibition will celebrate the beauty, power and humanity of these works of art.

The exhibition begins with works from the Mughal Court, including some of the earliest realistic portraits made for the Emperors Humayun (r.1530–56) and Akbar (r.1556–1605) and the magnificent court portraits made for their successors Jahangir (r.1605–27) and Shah Jahan (r.1628–58), as well as studies of Mughal courtiers, holy men and servants. The distinctive regional styles from Rajasthan and the Punjab Hills are also shown alongside the European–influenced works produced by Indian artists under British rule.

These paintings are a record of a rich and complex history, embracing influences from Iran and Europe as well as local Hindu and Muslim traditions, showing that the Indian portrait can stand shoulder to shoulder with outstanding examples of portraiture from around the world.

Contemporary artists, The Singh Twins, will explore themes from the exhibition with a display of work in the Studio Gallery. Find out more