Thomas Lawrence took the London art world by storm at the Royal Academy exhibition of 1790. Although virtually unknown, this precocious 21-year-old artist dazzled audiences with his daring full-length portraits of Queen Charlotte and the actress, Elizabeth Farren. Their frankness, vivacity and delight in textures and detail departed from the overblown allegories of ‘Grand Manner’ portraiture. The critics proclaimed Lawrence the rival and successor to Sir Joshua Reynolds, the founding President of the Academy.

Lawrence began his rapid ascent in the art world with his election to the Academy in 1791. His progress was also supported by a network of patrons, including the connoisseur Richard Payne Knight and the financier John Julius Angerstein who became Lawrence’s lifelong friend and advisor.

The paintings seen in this section of the exhibition reveal Lawrence’s range and ambition during the 1790s. The portraits of Arthur Atherley and Robert Jenkinson highlight his skill in characterization and his fascination with youthful masculinity on the brink of maturity. 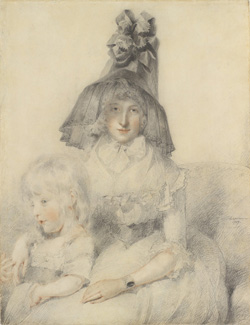 Charlotte Louisa Henrietta Papendiek and her Son
by Sir Thomas Lawrence, 1789
Lent by The Metropolitan Museum of Art, Bequest of George D. Pratt, 1935 (48.149.19)

Delineating a Life: Lawrence as Draughtsman

Lawrence was a talented, prolific and inventive draughtsman. The act of drawing was fundamental to his creativity throughout his career. It was also a sociable pursuit and many of his most evocative drawings record his intimate friendships and provide an insight into an otherwise private man.

Lawrence began as a child-prodigy working in pastel. His debut as a painter did not reduce his interest in drawing. Highly-finished, virtuoso chalk portraits such as those of Charlotte Papendiek or Mary Hamilton, intended to be framed and displayed, were vital to Lawrence’s work and public reputation. Other portraits such as the intriguing joint drawing of his friend Richard Westall or the affectionate image of Amelia Angerstein and her child were made for more personal reasons.

Lawrence’s most innovative technique was his method of using red, black and white chalk on primed canvas. He often drew directly onto the canvas as a preliminary stage to painting. While travelling in Europe, between 1818 and 1820, Lawrence developed this quick and practical approach for fashionable portraits like that of Countess Czernin made in Vienna. 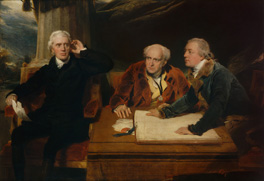 The decade between n 1805 and 1815 was one of Lawrence’s most creative and innovative periods and established his pre-eminence over fellow portrait painters. Beginning with Frances Hawkins and her Son, in these years he explored the challenges of group compositions. This painting and the dramatic group portrait of the banker Sir Francis Baring and his partners were said to put Lawrence ‘at a distance’ from his rivals.

Lawrence sought to push his art into new territory in other ways. John Philip Kemble as Cato was the last and most resolved in a series of what he called his ‘half-history pictures’. These works aimed to combine portraiture with the academically more elevated genre of history painting. 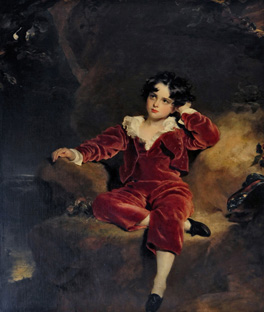 Britain’s victory in the Napoleonic Wars in 1815 enabled Lawrence to achieve the greatest international reputation of any British artist. Commissioned by the Prince Regent, Lawrence travelled across Europe painting a series of monumental portraits of the sovereigns and military leaders who were allied in the defeat of Napoleon. These epoch capturing portraits, which hang together in the Waterloo Chamber at Windsor Castle, ensured Lawrence’s status and influence abroad.

Knighted for his role as the prince’s artistic envoy, Lawrence began the series in London in 1814 and left for the Continent in 1818. In Vienna, he painted Charles, Archduke of Austria, enjoyed the glittering social life of the aristocracy and undertook private commissions such as Selina Meade. Just as he was preparing to return, the prince ordered him to paint the Pope. Lawrence’s year in Rome was the apex of his artistic aspirations and his portrait of Pius VII was the crowning glory of his artistic mission.

In the 1820s Lawrence achieved a growing reputation in France. He stayed in Paris in 1825 and exhibited works such as the famous Charles William Lambton at the Paris Salon. His work particularly influenced the Romantic school of French artists, most notably Eugène Delacroix. 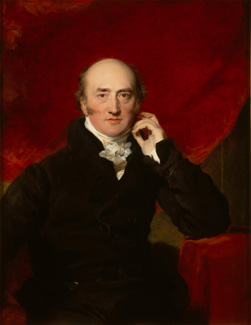 Court, Academy and Society: the 1820s

Lawrence became President of the Royal Academy in March 1820. Two months earlier the Prince Regent had succeeded to the throne as King George IV. He was to become Lawrence’s principal patron in the decade that followed. Lawrence’s other significant connections during this period were with the Tory politicians who governed throughout the 1820s, especially Robert Peel who commissioned an important series of portraits from him. These include the Earl of Aberdeen.

Lawrence complained that his official position took its toll in time and energy. But it allowed him to move in the most powerful circles as never before. Producing the defining image of Regency high society, Lawrence painted leaders of politics and fashion such as George Canning and Lady Londonderry. ‘I have never painted better’, he wrote of his mature style in May 1825.

In his last years Lawrence led a quieter, more private life, surrounded by his work and collections of Old Master drawings and antique casts at his home in Russell Square, Bloomsbury. Painting to the end, he died there on 7 January 1830.