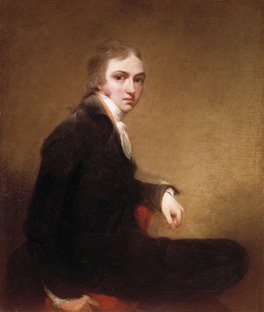 Self-portrait
by Thomas Lawrence, c. 1787-1788
The Berger Collection at the Denver Art Museum

With the temperament and flair to capture the power and brilliance of the age, Thomas Lawrence was the leading portrait painter in Regency Britain. A child prodigy from humble beginnings, he began his meteoric rise through the art world at the start of the 1790s aged just twenty-one.

Lawrence’s life and art is made all the more remarkable by the extraordinary turmoil and political change of the period through which he lived. His career unfolded against the backdrop of the French Revolution and long wars against France which lasted from 1792 until 1815. With peace in Europe came a royal commission to travel across the Continent painting the sovereigns and generals who were allied in the defeat of Napoleon.

Elected President of the Royal Academy on his return from the Continent in 1820, Lawrence was established as the leader of the art world and produced some of his most admired portraits. He died unexpectedly in January 1830 and was honoured with a state funeral reflecting his artistic achievement and influence.

Lawrence’s father takes over the Black Bear at Devizes, a coaching inn on the road from London to Bath where, from the age of five, Lawrence is encouraged to entertain visitors with recitals from Milton and sketching their likenesses in pencil.

Lawrence is awarded a medal from the Society of Artists for the best copy after the Old Masters.

Lawrence moves to London and takes lodgings at 4 Leicester Square, then in Jermyn Street. He is introduced to Sir Joshua Reynolds, who gives him encouragement and comments on a painted self-portrait. Lawrence is enrolled at the Royal Academy Schools for a few months. He exhibits seven pastels at the Royal Academy but receives no mention by the critics.

When King George III is incapacitated by serious mental and physical illness, there is a crisis over the proposed Regency of the Prince of Wales.

Lawrence exhibits his first full-length portraits in oil at the Royal Academy exhibition; subsequently he is summoned to Windsor to paint Queen Charlotte, where he befriends Mrs Papendiek. He executes two of the most important drawings in his early career, Mrs Papendiek and Mary Hamilton.

Lawrence is named an Associate member of the Royal Academy, despite being technically too young to be elected.

He succeeds Reynolds as Painter-in-Ordinary to George III. Exhibits portrait of Arthur Atherley at the Royal Academy.

Along with his friend Richard Westall, Lawrence is elected a full Academician.

Lawrence’s painting of Lord Mountstuart, exhibited at the Royal Academy, is criticised by George III.

Exhibits his last pastel at the Royal Academy.

Both of Lawrence’s parents die.

Major French and Italian paintings from the Duke of Orléans’ collection are exhibited in London. Maria Siddons dies, after making Lawrence promise not to marry her sister Sally. The artist’s complicated relations with both women had destabilised his working life for several years.

Lawrence begins his first ‘half-history portrait’ of Kemble as Coriolanus.

The Act of Union creates a single United Kingdom of Great Britain and Ireland.

Lawrence stays at Blackheath while painting the Princess of Wales and her daughter, Princess Charlotte.

A temporary peace between France and Britain (the Peace of Amiens) is negotiated.

Many British artists flock to Paris to see artworks transported there by Napoleon; Lawrence does not have time to leave his work.

Lord Nelson wins a decisive naval victory against Napoleon at the Battle of Trafalgar.

Lawrence is implicated in the ‘Delicate Investigation’ into alleged impropriety with the Princess of Wales and has to give testimony defending his name against imputations of improper behaviour.

He exhibits Lord Thurlow at the Royal Academy, a painting commissioned by the Princess of Wales, but claimed for the Prince of Wales’s collection.

George, Prince of Wales, is appointed Prince Regent due to the continuing illness of his father.

Lawrence moves to a newly built house in Russell Square, which is adapted for him by Robert Smirke Junior.

The abdication of Napoleon and the Hundred Days lead to a temporary peace.

The Prince Regent commissions Lawrence to paint the allied leaders who had conquered Napoleon.

He paints the Emperor of Russia, King of Prussia, Count Blücher and Count Platov on their visit to London.

Napoleon escapes from Elba and briefly regains power; the Battle of Waterloo marks the definitive end of the Napoleonic Wars.

He finishes his portrait of Isabella Wolff and exhibits it at the Royal Academy, along with a full-length portrait of the Duke of Wellington.

He is granted a knighthood in recognition of his mission to Europe to paint the allied leaders for the Prince Regent.

Lawrence travels to Aix-la-Chapelle in September at the invitation of Charles Vane-Stewart, and finally begins the commission to the paint the allied leaders who conquered Napoleon.

In November he moves with Vane-Stewart from Aix-la-Chapelle to Vienna where he continues to paint key leaders but also mixes in high society and executes a number of portraits of society and political figures.

Lawrence receives an unexpected request from the Prince Regent to extend his journey and travel to Rome to paint Pope Pius VII. He moves from Vienna to Rome at the end of April. Spends much social time with the Duchess of Devonshire.

Queen Caroline endures a public ‘trial’ in the House of Lords to judge the grounds for divorce. Lawrence returns to England in March, to find that on the death of Benjamin West, he has been elected President of the Royal Academy.

Lawrence delivers his Presidential Address to the Students of the Royal Academy in which he calls Reynolds’s Mrs Siddons as the Tragic Muse ‘indisputably the finest female portrait in the world’.

The first photograph is taken by Joseph Nicéphore Niépce.

Lawrence is awarded the Légion d’honneur.