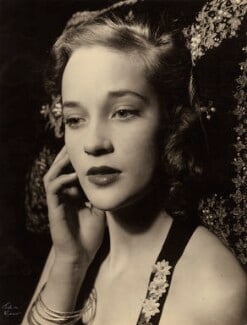 Ida Kar was born Ida Karamian to Armenian parents in Tambov, Russia, on 8 April 1908. She was educated at the prestigious Lycée Français, Alexandria, Egypt before travelling to Paris where, with Heinrich Heidersberger, a young German surrealist painter, Kar first experimented with photography.

In 1933 Kar returned to the family home in Alexandria, where, working as a photographer’s assistant, she met and married Edmond Belali. Together they moved to Cairo and established a photographic studio named Idabel that exhibited in the city’s surrealist exhibitions in 1943 and 1944.

Among those collaborating with the surrealist group as a poet and artist was Victor Musgrave, an English RAF officer stationed in Cairo. Meeting Musgrave changed the path of Kar’s life; during the Second World War, Kar and Belali were divorced, allowing her to marry Musgrave in 1944.

After Kar and Musgrave’s move to London in 1945, Kar began to advertise as a theatrical photographer, taking sophisticated casting shots of young actors. In 1949 the couple moved to 1 Litchfield Street, just off Charing Cross Road, where Kar established a studio on an upper floor and Musgrave assisted with the running of a small commercial art gallery in the same building.

In the early 1950s Jacob Epstein became one of Kar’s first artistic subjects. Kar subsequently made numerous photographs of artists in their studios, some of which have become defining portraits and important social documents of cultural life. Forty Artists from London and Paris - Gallery One

In December 1953 Victor Musgrave took over the space at 1 Litchfield Street, re-opening it as Gallery One, which soon became celebrated for showing art from outside the mainstream. Both here and at later premises Musgrave’s impressive programme included the first solo shows of F.N. Souza and Gillian Ayres and London’s debut exhibitions of Enrico Baj’s nuclear paintings and Yves Klein’s monochromes.

In the spring of 1954, Kar took a three-month sabbatical from her theatrical photography to build up a notable portfolio of artists at work. The results of Kar’s ‘busy round of visits to studios and ateliers’ in Paris were shown alongside fifteen of her portraits of British artists at Gallery One in October under the title Forty Artists from London and Paris. They were licensed to Camera Press and circulated with captions by Bill Hopkins, a novelist and lodger at Litchfield Street. 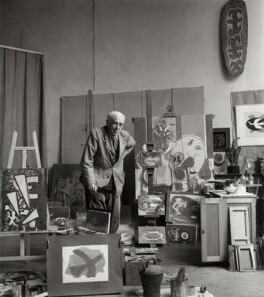 Portraits of Artists and Writers

From the mid-1950s the Kar-Musgrave household became a meeting point for ‘bohemians’. Novelist Bill Hopkins, a lodger at Litchfield Street from 1954 recalls a residence on the edge of Soho where writers and painters mixed with socialites and the demimonde.

In March 1956 Gallery One reopened in larger premises. The Times reported, ‘a modest, welcoming doorway has been thrown open at 20 D’Arblay Street, amid the labyrinth picturesqueness of Soho.’ Kar photographed many of Musgrave’s innovative artists including Paul Millichip and Sandy Weatherson

In 1959 on commission from the Tatler, Kar photographed London’s established art dealers and the Director of the Whitechapel Art Gallery, Bryan Robertson, confirmed that Kar would exhibit there the following year. In preparation Kar travelled to Moscow, photographing Dmitri Shostakovich, and in Paris secured sittings with playwright Eugène Ionesco and co-founder of Cubism, Georges Braque.

Kar’s literary subjects included T.S. Eliot at the Faber & Faber offices, her lodger Colin MacInnes, pictured in his sparse room above Gallery One, and MacInnes’s friend Terry Taylor, who became Kar’s assistant. She portrayed Trinidadian-born writer Samuel Selvon at the time of The Lonely Londoners and young author Laura Del Rivo in Peter Russell’s bookshop which occupied the ground floor of 20 D’Arblay Street. 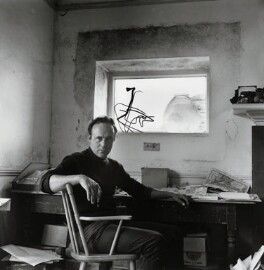 Published in July 1961, this series of artists living and working in St Ives was one of the photo essay commissions that Kar received from the Tatler.

Kar photographed artists both in their studios and going about their daily lives, sometimes with their families, creating a vivid portrait of the fishing town and its creative inhabitants. The portfolio captures a unique moment in the development of an artistic community.

Kar’s visit followed an influx of young artists to St Ives in the 1940s and 1950s, including Patrick Heron, Terry Frost and Peter Lanyon. They joined the established artists, such as Barbara Hepworth and Denis Mitchell, and became members of the Penwith Society of Arts. The exhibiting society, of which Hepworth was a founder member, opened new premises at St Peter’s Loft shortly after Kar’s visit. 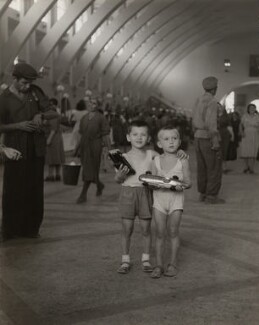 From the late 1950s Kar travelled widely taking her Rolleiflex with her. In 1957, on her first visit to Armenia since her childhood, Kar was treated as an honoured guest; she sat for the sculptor Nikogos Nikogosyan and an exhibition of the photographs she made there was staged in the capital Erevan (now Yerevan). She made further trips to Moscow in 1958 and 1959 that resulted in a substantial number of Russian portraits included in her Whitechapel Art Gallery exhibition.

Kar travelled to East Germany in September 1959, ten years after the formation of the German Democratic Republic (GDR). An exhibition of her Armenian photographs was held in Berlin at the Central House of German–Soviet Friendship and Kar took reportage photographs in both black-and-white and colour.

Kar was invited by the Cuban government to attend the fifth anniversary celebrations of the revolution in Havana in January 1964. She photographed the country’s president, Fidel Castro and the artists and writers of a country whose Communist ideals she herself embraced as well as taking reportage photographs in Havana and the surrounding countryside. Kar’s Cuban photographs, exhibited in London in 1965, marked the last publicly recognised creative phase of her career, and a move towards a documentary style in accordance with the changing fashions in photography. The London Scene and later sittings

With the success of Kar’s Whitechapel Art Gallery retrospective in March 1960 she began the decade as  ‘photographer of the famous’. In 1961 Musgrave’s Gallery One moved to North Audley Street in Mayfair. Here Kar’s subjects included Gustav Metzger at the Festival of Misfits and Bridget Riley at her second solo exhibition, before the closure of the Gallery in 1963.

Capturing the zeitgeist, Kar photographed her friend Brian Robins and his wife in their coffee bar, The Farm, and former assistant Terry Taylor listening to jazz records. As a member of the anti-nuclear Committee of 100 Kar was well placed to photograph Bertrand Russell at a demonstration in Whitehall.

Kar continued to photograph artists, while exhibiting in Moscow in 1962 she photographed the painter Oskar Rabine with his wife and son. She also turned her attention to commissioned assignments for Animals magazine and was often accompanied on her trips to European zoos by her pupil Julieta Preston.

In 1968 John Couzins became one of Kar’s last assistants and although sittings were no longer numerous, together they portrayed fellow-photographer Bill Brandt in his Kensington flat. In the summer of 1974 Kar embarked on a project photographing nudes in a make-shift studio in her Bayswater bedsit. It was a final creative phase before her death on 24 December that year.