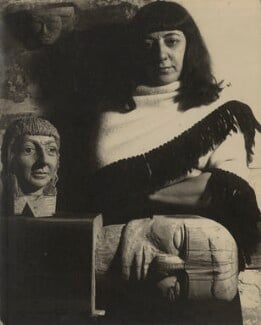 The peak of Kar’s photographic career was reached when she was middle-aged. However her charisma and skill as an artist was in no doubt influenced by her youth spent in her homeland Armenia, student days in Paris at the height of surrealism and the vibrancy of Cairo during the Second World War. It was here that she met Victor Musgrave, who became her second husband.

Musgrave went on to open Gallery One in London in 1953, and the bohemian circle associated with Kar and Musgrave’s life energised the otherwise austere reality of the post-war years and provided the context and subject matter for Kar’s photographs.

During her lifetime Kar witnessed the increased acceptance of the photographic medium as an art form and the shift of the aesthetics in photography to a less formal approach.

Ida Karamian was born on 8 April in Tambov, Russia, to Armenian parents. Ida spent her childhood in Armenia, Russia and Iran.

Kar continued her education in Paris and began to study music. Here Kar was introduced to the German surrealist painter and photographer Heinrich Heidersberger. With Heidersberger Kar produced her first experimental photographs, and through him she came to know many writers and artists living on the Left Bank.

Kar returned to Egypt and lived with her parents in the Rue Tanis, Alexandria

After a chance meeting with a Hungarian photographer, Kar started work as his assistant and receptionist. She was able to use the photographer’s facilities, and made a number of portraits.

Victor Musgrave (1919–84), writer, artist and advocate of the avant-garde, was drafted to Cairo. He published and edited Contact, the first services periodical to appear in the Middle East, and wrote art criticism for the Egyptian Gazette.

Following a divorce from Belali, Kar married Victor Musgrave; they set up home in the Darb el-Labana district of Cairo.

Kar and Musgrave left Egypt after the end of the war and moved into a small flat in London near Regent’s Park.

Kar exhibited at the Anglo-French Art Centre in St John’s Wood, north London. She began to advertise as a theatrical photographer.

Kar and Musgrave moved to 1 Litchfield Street, near Charing Cross Road, where the painter John Christoforou had opened a small gallery. Musgrave was appointed by Christoforou to staff the gallery, and Kar established a small studio on an upper floor.

Kar assisted in the guardianship of Theodore Garman (1924–54), an artist and the only son of Jacob Epstein and Kathleen Garman. During this time Kar had access to Epstein’s studio and took photographs at a number of sculpture sittings.

Kar continued to photograph actors and actresses with strong lighting and tight cropping.

Kar began a series of photographs of artists and writers. In December Musgrave opened Gallery One at 1 Litchfield Street.

Kar travelled to Paris to photograph artists in their studios. Kar’s exhibition Forty Artists from London and Paris ran at Gallery One from 12 to 31 October 1954. Bill Hopkins, a writer, moved in with Kar and Musgrave as a lodger.

Kar began to photograph artists showing at Gallery One.

In March Gallery One re-opened in larger premises at 20 D’Arblay Street, Soho. John Kasmin (who later became an art dealer) began to work for Musgrave in the gallery and for Kar, promoting her work and organizing sittings. The writer Colin MacInnes became their lodger.

Kar was commissioned to return to Armenia for the first time since her childhood. In Armenia Kar was treated as an honoured guest. An exhibition of her Armenian photographs opened in Yerevan on 29 August and was well attended. She returned to London in October.

Kar began to photograph regularly for the Tatler. Kar’s Armenian photographs were published in her first cover story, ‘Return to Armenia’, in the Tatler & Bystander (8 October).

Bryan Robertson, Director of the Whitechapel Art Gallery, wrote to Kar confirming, subject to trustee approval, that she would have an exhibition of her work at the Whitechapel in 1960.

Robertson wrote Kar a letter of commendation to encourage prospective sitters in Europe and Russia.

In the summer Kar travelled again to Armenia and in September she visited East Germany, where she made documentary photographs of daily life. An exhibition of her Armenian photographs was held in Berlin in the Central House of German–Soviet Friendship. In Moscow, where she travelled with her assistant John Cox, Kar photographed several distinguished sitters.

Kar travelled to France to photograph sitters for the Whitechapel exhibition.

Following a period of intense preparation, Ida Kar: An Exhibition of Artists and Writers in Great Britain,

France and the Soviet Union opened at the Whitechapel Art Gallery on 22 March and ran until 1 May. It was the first one-person photographic show to be held in a major London art gallery. Kar received critical acclaim, and her boldly presented work also proved to be a popular success.

In April Gallery One moved to 16 North Audley Street, Mayfair.

Kar’s photo-essay ‘Men Who Make Music’ was published in Queen (24 May). Kar visited St Ives and photographed the artistic community there. Her photographs were published as ‘Le Quartier St Ives’ in the 26 July issue of the Tatler & Bystander.

Kar was invited to exhibit seventy-six of her Whitechapel prints at Moscow’s House of Friendship. It ran from 2 to 15 April and was very well received both by the public and by the international press.

Kar signed a contract with the weekly Animals magazine. Her photographs appeared in the magazine until 1965.

At the invitation of the Cuban government, Kar attended celebrations marking the fifth anniversary of the Cuban revolution during a five-week visit beginning in January. There she photographed the president Fidel Castro, had sittings with artists and writers, and photographed street life in Havana and the surrounding countryside.

In February, an exhibition of Kar’s Cuban photographs ran at the Hamiltons Gallery for a week before moving to Stepney Central Library.

The photo-historian Helmut Gernsheim, acquired 124 of her exhibition prints for his collection housed at the University of Texas. The Victoria and Albert Museum in London acquired sixteen of Kar’s portraits.

Kar and Musgrave moved to 16 Rex Place in Mayfair.

Despite worsening mental health, Kar remained committed to photography, beginning a project to photograph nudes in a makeshift studio in her bedsit. Kar began to record her autobiography on tapes which are now lost.

Ida Kar died alone in her home following a cerebral haemorrhage on 24 December.