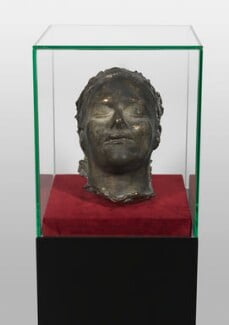 Tracey Emin's Death Mask is on loan to the National Portrait Gallery from the artist and is displayed alongside her photo-based self-portrait from the collection, The Last Thing I said to you is don't leave me here 1.

The death mask, which enjoyed a popular revival in the nineteenth century, was a method for preserving the final expression and physiognomy of the famous or infamous, largely based on the belief that facial features and proportion could explain personal attributes such as genius or criminality. These likenesses were often produced and distributed in multiples as plaster casts could be taken from a bronze original.

In an ironic reference to the much discussed autobiographical nature of her practice which has dominated critical reception of her work, Emin has cast her own death mask during her life-time creating a contemporary portrait with an historic allusion through her use of this lost tradition.

Death Masks were most usually made of male subjects. The red appliqué fabric on which Emin's bronze head is placed refers to the frequent use of quilting and embroidery in her work, associated with the domestic sphere of women, which challenges masculine frameworks of history and art history. The National Portrait Gallery holds over thirty death-masks in its collection as well as a smaller group of life-masks, mostly of well known artists and politicians and including only one female subject, a cast taken of the actress Ellen Terry.

Emin, whose work is often based on images of herself, once commented "It is like they have seen my art by seeing me". In this work she offers herself in perpetuity as an enclosed specimen or museum display, literally transforming herself into an object for the scrutiny of generations to come.

The Last thing I said to You is Don't Leave Me Here. 1 is one of four large-scale photographic self-portraits Emin produced in 2000. It shows her posed in the Whitstable beach hut purchased by herself and fellow artist Sarah Lucas in 1992 and reassembled for exhibition in Ant Noises 2 (Saatchi Gallery, 2000). In the conjunction of image and title the piece evokes the experience of loss and abandonment, suggestive of the recollection of a failed relationship, a re-occurring theme explored in Emin's work.