Heroes and Villains: Scarfe at the National Portrait Gallery 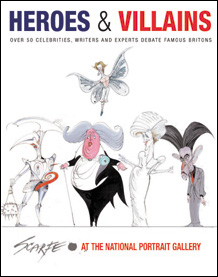 Joanna Lumley, Ian Rankin, Simon Schama, Stephen Bayley, Mo Mowlam and Melvyn Bragg are just a few of the public figures who argue their views for and against subjects as wide ranging as Henry VIII, Oswald Mosley, Virginia Woolf, the Beatles and Margaret Thatcher.

The display presents a small selection from the 35 caricatures commissioned for the book.

Gerald Scarfe's long and prestigious career has included work in many of the world's best-known publications, including Punch, Private Eye, The Sunday Times and The New Yorker. He is also acclaimed for his innovative, award-winning designs for theatre and cinema.

The display takes selected works from the fully illustrated publication with an introductory essay by Matthew Parris, contributions from over 45 celebrities, writers and experts and over 100 illustrations, 85 in colour. Heroes and Villains: Scarfe at the National Portrait Gallery is published 29 September 2003, price £20 (hardback).