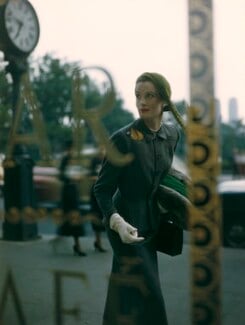 Standing at 6 feet 5 inches tall, Parkinson was unable to remain unobtrusive behind the lens and instead created 'Parks', the moustachioed, ostentatiously elegant fashion photographer - as much a personality as those who sat for him. His flawless professionalism, and well-rehearsed eccentricities reassured the uneasy sitter and disarmed the experienced. 'Parks' reinvented himself for each decade of his career, from his ground-breaking spontaneous images of the 1930s, through the war years and the 'Swinging Sixties' to the exotic locations of the 1970s and 1980s.

Publication
The display celebrates the publication of a fully illustrated book by Robin Muir, with a foreword by Iman. Price £30.
Robin Muir is a curator and writer on photography, and a former picture editor of British Vogue and the Sunday Telegraph Magazine.
Norman Parkinson: Portraits in Fashion, by Robin Muir, is available from our online shop.