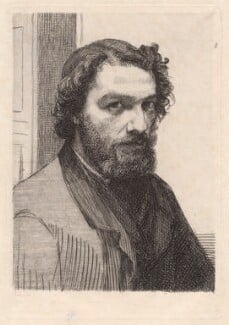 Alphonse Legros, 1837-1911, a painter, etcher, sculptor and art teacher, was born in Dijon, but spent the greater part of his professional life in England, naturalizing in 1880. After early training in Dijon and Paris, Legros started making etchings in 1855. He was clearly at home in this medium, continuing in it for many years and being instrumental in the revival of etching in the late 19th century in both France and England. He was one of the group of artists who proposed the idea of the Société des Aquafortistes to the French publisher Cadart in 1862 and was a founder member of the Society of Painter-Etchers in London in 1880.

Associated with the Realist school of painting in France, Legros had some success with his exhibits at the Paris Salon, but fell on hard times and was persuaded by Whistler to move to London in 1863. There he survived by teaching and etching and was assisted by the Rossetti brothers and George Frederic Watts to obtain commissions for paintings.

The real turning point in his fortunes arrived when he was appointed Slade Professor of Fine Art at University College London in 1876. Although Legros is sometimes said to have remained isolated from artistic developments in the later part of his career his legacy, in the subsequent careers of his students, was significant. Works by three of those students are included in this display.

The prints on display are by Legros' students, colleagues and contemporaries and were collected by the late Frank Bliss, an American businessman and the father of the composer Sir Arthur Bliss. Frank Bliss amassed a particularly good collection of Legros' own etchings, the catalogue of which forms an important reference work on the subject.

All the prints are displayed in the mounts in which they were kept by Frank Bliss, bearing his own annotations. Prints can be damaged if mounted in inappropriate materials and it says much about Bliss's approach to collecting that these were mounted in a type of low-acid board over sixty years ago, when such materials were less readily available.