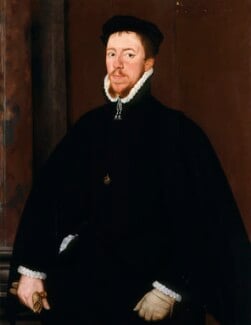 The National Portrait Gallery is delighted to have acquired a highly significant portrait of Thomas Howard, 4th Duke of Norfolk, one of the most powerful figures in the Elizabethan Court. The portrait, one of only two lifetime oil portraits of the sitter, was acquired by private treaty sale through Christie's, with the generous support of the National Heritage Memorial Fund and the National Art Collections Fund (Art Fund). No other lifetime portrait of Thomas Howard is owned by a public collection and this important acquisition addresses a significant gap in the narrative history of sixteenth-century England among the National Portrait Gallery's collections.

At the age of around sixteen Thomas Howard succeeded to the Dukedom and a vast inheritance. He later become Earl Marshal, a Privy Councillor and he supervised the funeral rites of Mary I and the Coronation of Elizabeth I. Between 1554-1572, the Duke of Norfolk was the premier nobleman in England whose wealth ensured great power and influence at court and whose actions changed the course of history. His turbulent relationship with Queen Elizabeth I and his flirtation with pro-catholic factions meant he became involved in a series of plots and political intrigues. As the key rival of Robert Dudley, Earl of Leicester, Norfolk's powerful position led to a deeply divided court, which characterised Elizabeth's reign. His secret plan to marry Mary, Queen of Scots, and the central part he played in the plot to attempt to ensure her succession to the throne, led to his dramatic fall from grace in 1571 and his execution in 1572.

The portrait was almost certainly painted directly from life and shows Norfolk at the age of 27. Fragments of an old inscription can be seen at the top right, which dates the picture to 1565, and further investigation will follow before the portrait is put on display in the Tudor Gallery.