About the Commission: A Film by Jan Bee Brown

The title of Jan Bee Brown's film, ‘As I Find’, is also the motto of the Liverpool Scottish Regiment. We take life as we find it and make the best of it that we can.

Two objects in the collection at the National War Museum of National Museums Scotland, the kilt and the toffee hammer, stand out as symbolic items with contradictory pasts. Discovering their contexts helped artist Jan Bee Brown to uncover truths and lies surrounding a photograph from her family archive, taken in 1914:

“How did a boy from Birkenhead come to join a kilted regiment? Why did Harry Douglas swear on the bible that he had Scottish blood? Having traced the Douglas family back to the Isle of Man what was his reason for paying a weeks’ wages to buy a kilt and join the Liverpool Scottish when his two brother’s had joined the King’s Regiment - the Liverpool Pals?

Highland regiments like these were akin to the French Foreign Legion; you downed a swift whiskey at the pub before you took the oath that you ‘had Scotch in you’. When Harry’s ship was requisitioned as a Hospital ship in 1915, he volunteered. He arrived in France on Christmas day, 1915. What or who was he running from and was the piece of wedding cake, returned unopened after his death, in July 1917, a final clue?

Before the war, Suffragettes used their toffee hammers to smash Post Office windows. The Douglas sisters were strong and capable women. Left at home they each had their own battle: my grandmother, Annie, was widowed in 1918. With two sons under the age of 5, she ran a grocery shop single-handed to feed her young family, leaving for market at dawn every working day. The youngest sister, Bertha, walked an hour to work in the local factory. She packed Sunlight soap all day; the advertising slogans were suitably jingoistic whilst the by-products were used in munitions factories to make shells and poison gas. She rose through the ranks for 8 years until she married in 1923. However, company policy forced married women to leave work. Having been given the independence of a good wage, once the war ended and the heroes were home how much had actually changed for women?” 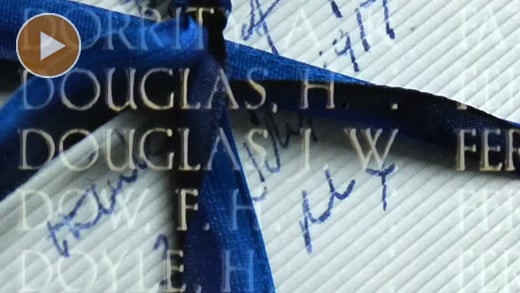 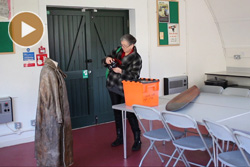 Watch a short video on the artist's experience with National Memory – Local Stories (2:28) 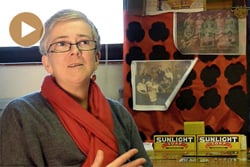 Watch a short video on the artist's creative process (1:48)

View the collection objects that inspired the work