Experience the Artist's Commission: The Rifles Berkshire and Wiltshire Museum

About the Commission: Five Postcards by Henny Burnett

Small and personal objects, rather than guns and grenades, seem to hold the possibilities of the most intimate stories. Each of the postcards responds to a particular object in The Rifles Museum’s First World War collection. The resulting ‘portraits’ of these objects serve as alternative human portraits and are linked to relevant stories found in the First World War diaries of two local men. The diaries are also part of the Museum’s collection. 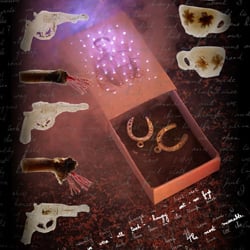 The starting point for this postcard was the homemade teabag that a solider created by piercing holes into an old tin. Laid on top of the image of the teabag is an image of Corporal Couldrey, the light shining through the holes in his image, referencing the fact he was wounded. My version of the teabag is made of a matchbox linking to soldiers’ other essential, apart from tea - cigarettes. Along the left side are guns and cigarettes at different stages of being smoked – linking to the soldiers’ rule of never lighting more than one cigarette per match due to enemy spotting the light aiming and then firing. Along the right side are three cups of tea. The text is extracts from Couldrey’s diary and the highlighted extract is the postcard message about ‘…no water (thus no tea) and fags’. 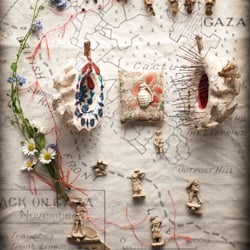 The starting point for this postcard was the ball grenade. The diarists both fought in Palestine. In the centre of the postcard is a small grenade on a flowery cushion. This references the quoted diary extract, commenting on the sandbags in the captured Turkish trenches being made of ‘..decorated cloth like cushion covers.

On either side is a cast ball grenade that has been split in half like a seed head, a beautiful but deadly object. The interior of one half is decorated with Turkish tiles. The other half has a coating of red wax and small entomology pins. My great-great uncle was an entomologist and after the First World War worked in the Near East. The red dye used in the wax comes from cochineal beetles. Cochineal beetles feed on cacti. The battle for which Mundy and Couldrey gained their medal for was fought amongst a cactus hedge. Further, the scarlet dye was used in red military uniforms. 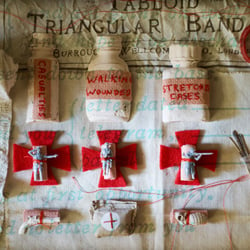 The starting point for this postcard was the tabloid first aid kit. The quote at the bottom of the image from Mundy’s diary is a description of a scene where casualties were so heavy that medical teams could not cope. I cast medical bottles and stitched onto plasters the sign posts that were found in trenches. Mundy commented on these signs with a sense of foreboding.  Across the image is the text from a field service postcard with its pre-printed messages, such as ‘I have been admitted into hospital sick/wounded.’ The soldiers would tick the appropriate message but they could not write any personal details or they would become null and void and not be sent. A form of censorship but also as many private soldiers would have been illiterate, it was a way of sending a message home. 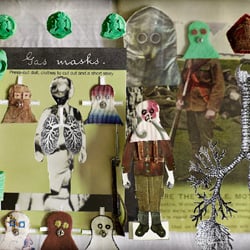 The starting point for this postcard was the anti-gas helmet. It’s made of a double layer of coarse material like canvas and has been stiffened with some anti-gas substance. It’s very unpleasant to handle and must have been horrible to wear. And, as the museum staff said, it was pretty useless as protection against gas. This led me to think about making gas helmets out of other material that might be more comfortable, like silk or cotton.

Many soldiers sewed their own gas helmets. This led to the idea of the using the cut-out child’s toy with interchangeable gas helmets. Behind the gas mask cut-out card is a photograph of Captain Merewether wearing a gas mask (he was Mundy and Couldrey’s company officer). At the top is a row of cast Wiltshire regimental buttons. They are green because gas attacked the metal and turned them this colour, thus the use of green on the other items. 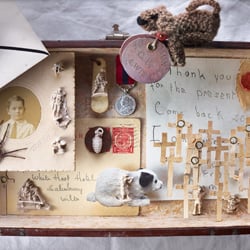 What did daddy do in the Great War?

For this postcard, the key collection object was a toy dog called Spider. Toys like this were given to English children whose fathers fought in the war. Spider was given to a child whose father died in the First World War.

The toy dog at the top of the image has dog tags around his neck. Each solider would have worn two dog tags around his neck to identify him should he be wounded or killed. These dog tags have the name and religion of Sgt. Mundy, the author of the diary extract at the bottom of the image. The knitted dog references the knitted socks, scarves and hats that were produced at home to be sent to fighting soldiers. The envelope with black edges was used to send announcements of a death or letters of condolence.

On top of the envelope is a moth, which is often a symbol of death. The photograph of a boy taken during the period of First World War is a relation of mine. 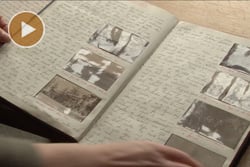 Watch a short video on the artist's experience with National Memory – Local Stories (1:54) 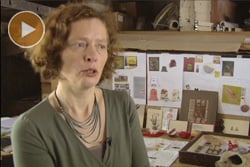 Watch a short video on the artist's creative process (1:09)