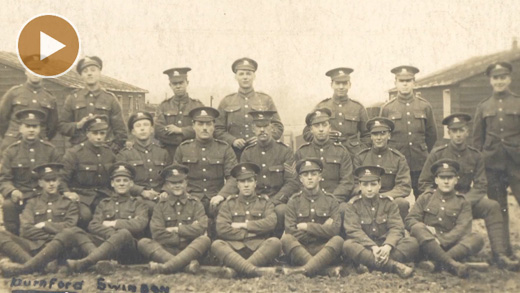 Our section of the film presented Cyril Page’s life as a young man. We wanted to show how emotional the First World War was for most people, and give an insight into what life was like generally for young men back then – something teens can understand and compare themselves to.  We had Hannah explain from a young person’s point of view.  She was putting herself in Cyril’s shoes.

I wanted the film to show the growth of the community he grew up in and how some of the landmarks still stand. I focused on the letters his family received when he died because it must have been very important to his family.

We wanted to show how ordinary people from Wanstead had their lives changed by the First World War. To give people in the area that Cyril used to live in a way to think about what happened in the past.

I wanted the film to express Cyril’s life and what made him go to war. I also wanted to show what Wanstead used to look like.

I wanted the film to express the reality of war and the limited amount of choices soldiers had.

We wanted to show the different things Cyril Page experienced as a soldier and how we think he would have felt. Also the difficulties of war and how it affected families at home as well as the soldiers.

We decided to use as many voiceovers as possible so the film would express as much emotion as possible.

Our part of the film shows Cyril’s early life.  We wanted to show his background rather than just portraying him as a soldier.  We decided to show the place Cyril lived to show the audience how much it has changed.

I wanted the film to show respect for the British soldiers, but also to show the brutality of the wars.  I decided to answer the questions about Cyril on camera, because I felt it was the best way to show my respect for Cyril Page and all the other British soldiers who fought for us.

We wanted to make people think about the backgrounds of the soldiers.

We tried to express emotion and how Cyril would have felt, but also to inform the audience.  We had a large amount of information accompanied by many pictures.  We did this to share information but also to make the war seem more personal by looking into Cyril Page’s life.

We wanted to show what the war was like at this time.  I think it was really important to show how lucky we are nowadays, so we can appreciate what we have and don’t take it for granted.

We wanted to express how countless soldiers were forgotten and how their lives were.

We wanted to show the average life of a soldier as well as the harsh realities of war. We also wanted to express to the public how war affects everyone, including people you care for and love.  We thought it was important to talk about Cyril after his death and what he left behind, his legacy. Cyril will not always be remembered the way we remember him, that’s because not everyone will get the chance we have in this project, but luckily there will always be a monument in Wanstead for Cyril and other soldiers just like him.

View the collection objects that inspired these works