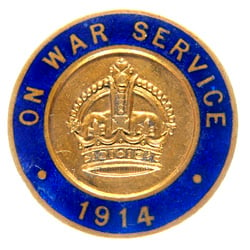 Badge worn by men to prove that they were on War Service at home to avoid confrontation and abuse, which was directed at young men for not signing up. White feathers were sent by women to those who did not sign up as a symbol of their cowardice. Made by the Admiralty in late 1914, when the ‘On War Service 1914’ badge was first issued to “workmen whose services are indispensable for the rapid completion of HM Ships and Armaments”. 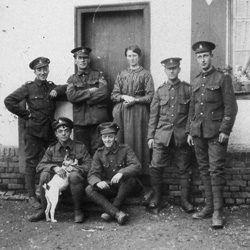 Photograph from the Hackney/Maultsaid Collection, showing a group of soldiers with a local girl and a dog, outside their billet in Poulainville, France, 1915. The soldier on the right is wearing the proficiency badge of a signaller on his left sleeve. The soldier next to him is wearing the aiguillette that denotes he was in the transport section 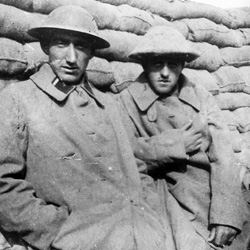 Soldiers in a trench

Photograph showing Gus Reid and Harry Millar in a trench in France, 1916. 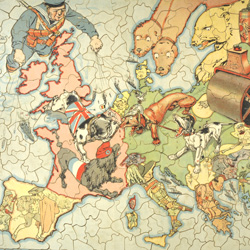 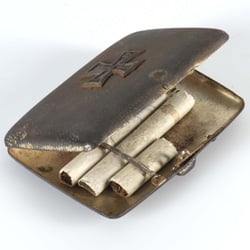 Cigarette case decorated with the Iron Cross, the emblem of the German Army, which has a origins in the symbolism used by the Teutonic knights of the 14th century. The brands of the cigarettes here are ‘Gulden Ring’ and ‘Londer Mischung’. The two and half cigarettes inside indicate that the German soldier who owned them perhaps died before finishing his cigarette. This case was donated to the museum in 1919. 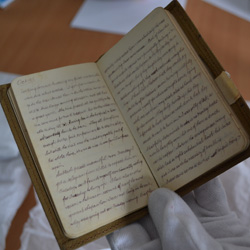 George Hackney was born in Belfast in 1888. During the Home Rule Crisis of 1912, he joined the Young Citizen Volunteers (YCV). At the outbreak of the First World War, the YCV became the 14th Battalion Royal Irish Rifles, who were sent to France in October 1915. On the 1 of July, 1916, Hackney, now a Lance Corporal, saw action at the Battle of the Somme, where many of his friends and comrades were killed and wounded.   Hackney kept four war diaries. They describe the training he received in both Ireland and England before the crossing to France. He wrote about the kindness of a stranger to him in France and how rats had ‘eaten a hole in my Emergency ration Bag and eaten about half a pound of biscuits.’ However after July 1916 Hackney, suffering from shell shock and DAH (disordered action of the heart), was shipped to Sheffield in September 1916, and then back to Ireland. He served out the rest of the War in Ireland and England. Hackney died in 1977 aged 89 years old.   Hackney not only kept war diaries but also documented his war experiences through photographs. He donated his photographic album and war diaries to the Ulster Museum in the mid-1970s. Hackney’s diary was the focus of the National Memory – Local Stories workshops at National Museums Northern Ireland. 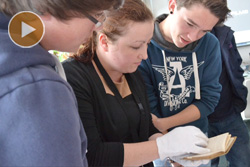