Why was there such a high level of recruiting in Scotland at the beginning of the war?

Between 1914 and 1916, Scotland produced more volunteers than any other country in the UK. The reasons for this initial enthusiasm are bound up with Scottish national identity, its economic situation, and a compelling propaganda campaign that appealed on many levels.

Here, a solitary Scottish soldier confronts the viewer from the empty street in Bruges where he stands guard. The German invasion of Belgium on 4 August 1914, and the massacre of its civilians, brought worldwide condemnation and moral outrage.

The words below refer cynically to the 1839 Treaty of London guaranteeing Belgium's neutrality – which the German Chancellor had dismissed as a 'scrap of paper'.

As this pre-war poster shows, recruiting on a local level was already part of everyday life in Scotland. The Dundee Territorials –  a reserve force – were not expected to go abroad, but by 1915, along with hundreds of newly formed volunteer battalions, they were fighting in France.

The new battalions of the British Expeditionary Force were the results of a national recruitment drive headed by the Secretary of State, Lord Kitchener.

Kitchener's 'New Armies' of volunteer soldiers included many 'Pals' battalions' – made up of men from the same local area, or who worked in the same industry. These men had enlisted together, with the promise that they would be able to serve alongside their friends, neighbours and work colleagues.

In Scotland, where soldiering had long been an honourable and respectable occupation, there were many inducements for men to enlist in local regiments.

Army service offered economic and social opportunities, and a far better quality of life than many could hope to achieve as civilians: a guaranteed rate of pay; a good diet (including meat every day); clothing and accommodation and a chance to escape the poverty of overcrowded industrial cities.

Scotland's long and historic military tradition had always attracted men into the army and both Highlanders and Lowlanders were proud of their reputation as good fighters.

It's estimated that more than 100,000 Scotsmen did not return from the war. Men who enlisted and fought together as 'pals', often died together in the same conflicts. The impact on small rural communities and large industrial cities was both devastating and far-reaching. 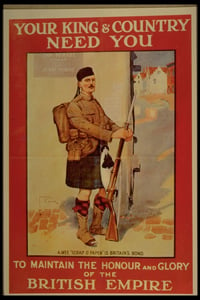 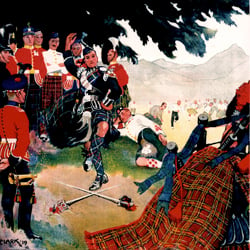 This recruiting poster for the Scottish Regiments dates from 1919. The poster reads 'Recruits Wanted for the… 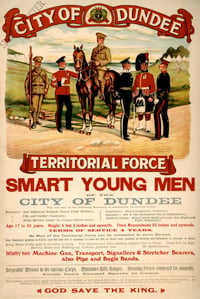 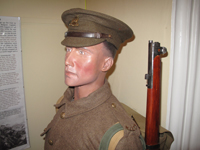 1915. Pipe banners, tied to the bass drone of the bagpipes, were part of the Scottish military tradition
From…