Picturing Conflict: the Arts of War
A View of the Parvati Temple

View of the Parvati temple
One of many photos taken by soldiers on and off duty during battalion tours in India ( 1st/4th Bn or 2nd/4th Bn, Wiltshire Regiment )
© The Rifles Berkshire and Wiltshire Museum

How did the war open up new horizons?

The First World War involved the mass movement of troops across the world. Here, four members of the Wiltshire Regiment pose for their photograph outside the Parvati Temple – a famous group of monuments in Madhya Pradesh, India. The temple (which is now a World Heritage Site) is on a hilltop, with panoramic views over the city of Pune.

This photograph, sent by Sergeant Frank Taylor to his wife in Wiltshire, is one of thousands of snapshots taken by servicemen during their overseas tours.

Taking photographs of our own experiences and places we visit seems utterly normal to us – but the First World War was the first time that ordinary soldiers, sailors and nurses, had been able to record their own journeys across the world, their leisure activities, and social occasions.

One of the first and most successful pocket-sized cameras, the Vest Pocket Kodak Camera, appeared in 1912. It was marketed at the outbreak of the war as the 'soldier's camera'.

For many men, the war provided their first experience of foreign travel – a huge inducement to joining up.  They shared these new experiences with their families through photographs, souvenir postcards and items of craftwork that they brought back home.

At this time, India was still part of the British Empire: two battalions of the Wiltshire Regiment were based there during the war – policing, reinforcing and supporting British rule.

The Indians in this photograph may well be local attendants, attached to the Parvati Temple. But hundreds of Indians were employed by the battalions and provided assistance in many ways – such as laundry hands, water carriers or animal handlers.

Additionally, over 1 million Indian volunteers left their own country to fight for the British Army overseas. For these men – just as for British soldiers serving abroad – the war brought life-changing opportunities to visit new places, and to encounter new landscapes, buildings, people and cultures.

View of the Parvati temple

Soldiers swimming in a river in India 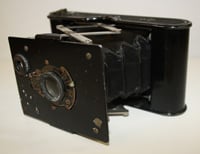 about 1918. This very popular pocket camera was marketed as ' the soldier's camera' .
© Redbridge Museum 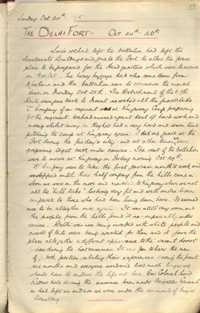 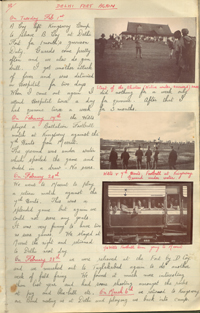