Cartoon by 'Pip' from Nurse Mellor's autograph book
She collected drawings, watercolours, verses, jokes and messages from the wounded soldiers in her care.
Part of 'Next of Kin' exhibition
© National Museums Scotland

Why was humour so important in the First World War?

During the war, Florence Mellor, from Kirkcaldy in Fife, worked as a nurse at Edenfield Auxiliary Hospital, Cupar and Craiglockhart War Hospital, near Edinburgh. As was common practice at the time, she kept a series of autograph books – collecting drawings, watercolours, verses and jokes from the many wounded soldiers who passed through the hospital.

Craiglockhart was one of many specialist hospitals treating soldiers suffering from shell shock. They were looked after by volunteer nurses – known as VADs – who, like Nurse Mellor, were often young girls.

This light-hearted cartoon by 'Pip' gives no indication of the serious and debilitating symptoms suffered by thousands of men returning from the Front Line. The nightmares, paralysis, muscle spasms, and uncontrollable shaking – which were thought at first to be the result of physical injury to the nerves and exposure to heavy bombardment.

Craiglockhart (best known as the place where poets Siegfried Sassoon and Wilfred Owen were treated) published its own magazine, called The Hydra – a common practice in war hospitals.

It was believed the patients would get better if they were engaged in 'meaningful' and structured activities such as handiwork and other creative tasks. Owen himself edited six issues of this magazine. As well as serious poetry, it included humorous material –  jokes and puns – and enthusiastic reports of Hospital clubs, such as poultry-keeping, model-boats, photography and gardening.

The importance of humour and laughter had long been recognised as a powerful way of counteracting, or masking, the disturbing anxieties and chaos of war – both behind the lines and on the home front.

Music hall entertainments, stage comedy and early cinema were full of slap-stick humour: Charlie Chaplin – a great favourite with the troops – made his film debut just months before the war started. Humorous postcards, even strip cartoons in the newspapers, helped people to cope with the daily strains of war.

One of the most popular marching songs – the cheerful instruction to Pack Up Your Troubles in Your Old Kit-Bag, and Smile, Smile, Smile – seems to capture this resolute determination not to give in to despair.

There was also much 'black' and ironic humour in the trenches, and at home. 'Pip's' cartoon on the closing page of this autograph book, dated May 1918, is a grim reminder that the reality of death was never far from young peoples' thoughts.

Only one month earlier, Nurse Mellor's own brother, Hayden, serving with 8th/10th Battalion Gordon Highlanders, had been killed in France. She kept these objects not only as a reminder of her own war service –  but of the loss of her brother. 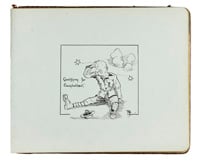 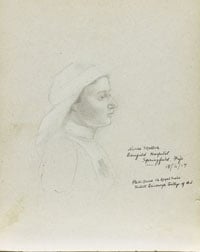 1917. Florence Mellor of Kirkcaldy, Fife, served as a volunteer nurse during the First World War. This… 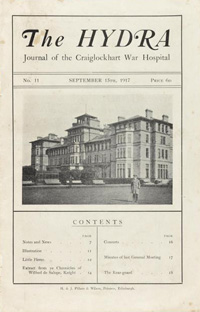 A copy of The Hydra,

the hospital magazine at Craiglockhart War Hospital. It contains verses by the hospital’s best-known… 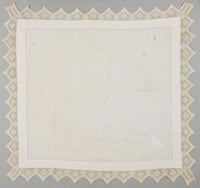 Tablecloth embroidered in white thread with signatures of staff and patients of the Welsh Metropolitan War Hospital, 1917

Patients were being treated  for the effects of shell shock.
© Amgueddfa Cymru - National Museum Wales

Butterfly shaped beadwork buckle. Made by a patient in St Fagans Red Cross VAD Hospital during the First World War as occupational therapy The trophies of war

soldiers of the 1st Battalion Wiltshire Regiment with captured German helmets and weapons, possibly taken at…