Picturing Conflict: the Arts of War
The Welsh at Mametz Wood

Charge of the Welsh Division at Mametz Wood, 11 July 1916
About 4,000 men from the Welsh Division were killed or wounded in this attack during the first Battle of the Somme. The wood still stands today, with a memorial to the 38th Division nearby.
Christopher Williams, 1918
© Amgueddfa Cymru - National Museum Wales

Can art convey a true picture of war?

The 38th (Welsh) Division drive back the German army, trampling over the livid corpses of soldiers in their frenzy. Christopher Williams's close up and nightmarish depiction of desperate and chaotic hand-to-hand combat recreates one of the most controversial offensives of the Battle of the Somme – the Capture of Mametz Wood.

Approaching the mile-long woodland across an open hillside, the Welsh battalions – mostly members of Kitchener's new volunteer Army - walked straight into the machine gun fire of the professional German soldiers entrenched on the perimeter.

During an intense five-day battle, 4,000 soldiers of the 38th Division were killed or wounded. The Division did not return to major action for over a year.

Williams, a pacifist, was not an official war artist, but was given the commission for this painting by the Secretary of State for War (later Prime Minister) David Lloyd George, who called him 'one of the most gifted of all Welsh artists.' The completed work hung for a while at no. 10 Downing Street.

Williams was given permission to visit the battle site, where he made preparatory sketches and got soldiers who had taken part in the action to pose for him. (He was also briefly arrested, having been mistaken for a German spy).

This huge and graphic painting, which leaves little to the imagination, greatly shocked the public who first saw it on display.

Among the soldiers who took part in, or were witness to the offensive at Mametz, were several artists and writers, including David Jones –  a private in the 1st Battalion of the Royal Welch Fusiliers.

In 1937, Jones published a long autobiographical poem about the war (‘In Parenthesis’). Its frontispiece – a blank-eyed, broken soldier in a ravaged woodland – embodied Jones's own experiences of the conflict at Mametz Wood, where he himself was wounded.

Study for Charge of the Welsh Division at Mametz Wood, 11 July 1916 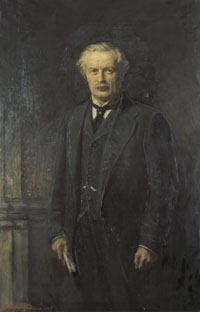 Study for Charge of the Welsh Division at Mametz Wood, 11 July 1916' 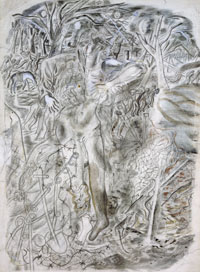 Frontispiece design for In Parenthesis

David Jones's epic poem of the the First World War, published in 1937. The poem was based on his own…