Born in Florence in 1856 to an expatriate American couple, John Singer Sargent spent his formative years touring European cities and resorts. On deciding to study painting in Paris, he enrolled at the École des Beaux Arts in 1874 while simultaneously developing his brilliant gifts as a painter under the teaching of Carolus-Duran, a fashionable French portraitist.

Sargent was at ease in the world of Paris studios and formed friendships with a wide range of French artists and fellow expatriates. One of his closest friends was Paul Helleu, the elegant painter and etcher of the beau monde. He sought out Claude Monet, who would remain a lifelong friend of both men, and Auguste Rodin, a titan of the French art world. Sargent was exceptionally widely read, especially in the French classics, but also in contemporary literature.

An early patron, the French playwright Édouard Pailleron, commissioned portraits of himself, his wife and his children, for which Sargent was compared to Van Dyck. The artist was a gifted pianist and a passionate musicologist. His modernist credentials were demonstrated by his admiration for the music of Richard Wagner, and also by his enthusiastic response to Spanish music and dance, which inspired flamenco pictures and portraits. 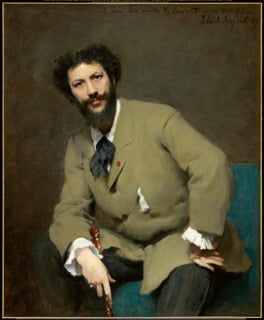 Sargent’s masterpiece, Carnation, Lily, Lily, Rose, was painted when he was between life in Paris and London (1885-6). The artist’s decision to move residence from one to the other came at a time of crisis, when his career was in jeopardy after his provocative portrait of Madame X (Madame Pierre Gautreau) caused a scandal at the Paris Salon of 1884. He found solace in the Anglo-American colony of artists and writers in the Cotswold village of Broadway, which included the American artists Frank Millet and Edwin Austin Abbey, the English illustrator Fred Barnard, and the writers Henry James and Edmund Gosse. Here he painted his famous garden picture, a constructed scene using the Barnard daughters as models, and portraits of other members of the community, including Lily Millet and Alice Barnard.

In Bournemouth, at this same period, he captured the wiry frame and nervous energy of the writer Robert Louis Stevenson in two intense characterisations. Sargent was experimenting with an Impressionist palette, painting vivid sketches of fellow-artists at work out-of-doors, including Claude Monet and Paul Helleu, and landscapes as avant-garde as any being produced in England at the time.

Sargent never gave up his American citizenship. He was at home in Boston and New York, where he had many friends and patrons and a burgeoning reputation. In the former city he carried through his two great mural schemes of decoration, in the Boston Public Library and the Museum of Fine Arts.

In 1890, Sargent had the opportunity of painting some of the great American actors of the age for the Players Club in New York, including Edwin Booth and Lawrence Barrett. A few years later he painted the Shakespearian actress Ada Rehan, and drew Mary Anderson. 1890 was the year in which Sargent painted the flamboyant Spanish dancer Carmencita, who entranced New York audiences with her flamenco dancing.

Music was a bond with Isabella Stewart Gardner, one of Boston’s cultural leaders, to whom he gave the portrait of the composer Charles Martin Loeffler as a birthday gift. 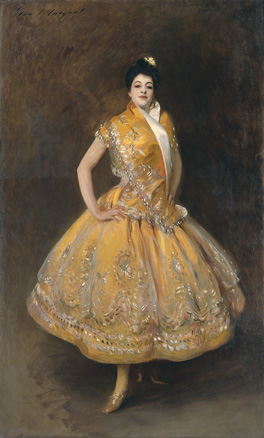 Sargent was immersed in the vibrant cultural life of London, and a friend to many artists, writers and musicians. In the 1890s, he was emerging as the leading Anglo-American portrait painter of his generation, and making his mark as a muralist with his commission, The Triumph of Religion, for the Boston Public Library.

In 1894 Sargent painted the ageing English poet Coventry Patmore and, by contrast, the writer and illustrator W. Graham Robertson, the epitome of youth and aesthetic refinement. The novelist George Meredith and the poet William Butler Yeats both sat to Sargent for charcoal drawings, and in 1913 the artist’s intimate friend Henry James, for a painting to celebrate his 70th birthday.

Sargent was extremely influential on the London musical scene, promoting the careers of many musicians, among them the French composer Gabriel Fauré. The London theatre is represented by the superb portrait of Ellen Terry as Lady Macbeth, a theatrical and artistic tour-de-force; by the enigmatic Italian actress Eleonora Duse, in a strange and mysterious image, and by the playwright and actor-manager Harley Granville-Barker, who revolutionised theatrical productions. 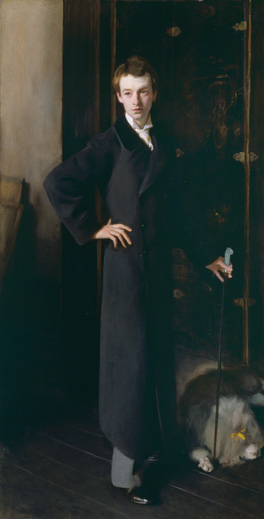 In the period after 1900, Sargent again turned to landscape as a relief from portrait commissions, travelling each summer and autumn to the Alps, Venice and southern Europe. He was invariably accompanied by friends, who, if not always in the top flight of artists, were substantial and talented people. He made a point of painting them as they sketched, peering as it were over their shoulders to see what they are doing.

These pictures might be construed as a form of self-portraiture, the artist musing on his own role in recording the natural world while watching others at work. We are present as art is being made, but our interpreter is Sargent and it is seen through his eyes. Among the masterpieces in this genre are An Artist in his Studio, depicting the Italian painter Ambrogio Raffele; The Fountain, a picture of Jane de Glehn sketching watched by her husband Wilfrid, and Villa Torre Galli: The Loggia, where Sir William Blake Richmond and Wilfrid de Glehn confront one another from opposite corners of the space. 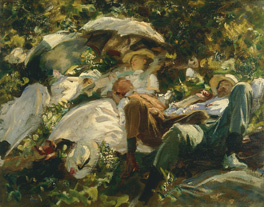