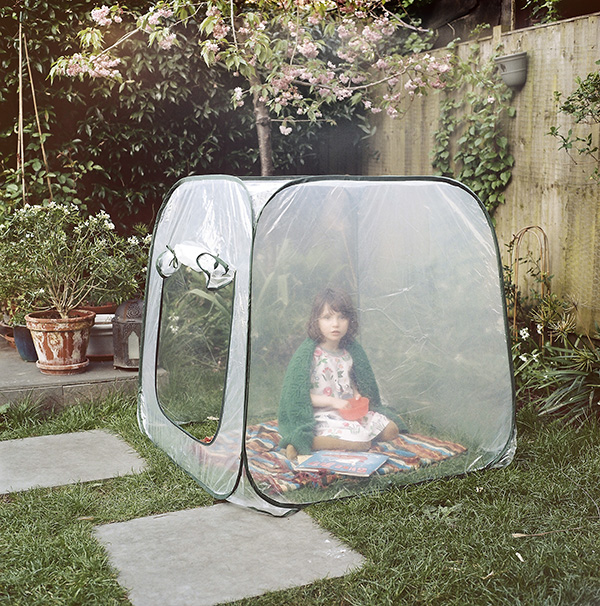 This is an image of the photographer’s daughter Eden, made as part of a larger series exploring themes of motherhood, intimacy and distance. In music, a fugue is a short melody that is repeated and developed by more than one line that can reappear as a recurring motif throughout a score. The word also refers to the psychological condition or episode of identity loss, often associated with a sudden departure from one’s usual environment.

Goldblatt made the portrait in her garden as Eden sits in a plastic seedling tent she has converted into self-contained space of her own. The larger series also includes portraits of Goldblatt’s partner and younger child. The narrative is ambiguous and weaves in and out of images of domestic tranquillity as well as those conveying unease and tension, night streetscapes and views of empty playgrounds. All were made in close vicinity of the family home during the 2020 Covid-19 lockdown in London, the photographer explains: ‘In making work about this time, I drew on my own small sphere, a radius of about 50 metres, 4 people, and a handful of streets. I am incredibly privileged to be able to do so. My home and my camera have both offered places of refuge and safety’.

Just before this unexpected and intense period of confinement, Goldblatt’s own mother had died and the series starts with a photograph of the family scattering her ashes. The project is a meditation on mothering her own children and a reflection on her own mother and her loss, but also the loss that so many people have experienced in the last year.

Of the portrait, Goldbatt says: ‘In such close, sometimes blissful, sometimes painful proximity to my children, I am aware of all that remains unknown between us. We are fused and separate, present and absent, elusive. I work on film [on a medium format camera], so the process too is blind and unknown – like the context, an invisible virus, marked by inaccessibility and intangibility’.

Lydia Goldblatt gained an MA in photography from the London College of Communication. Her work has been exhibited and published internationally in group and solo shows in the UK, France, Germany, the Czech Republic, Greece, China and Malaysia.

The judges felt that Lydia Goldblatt’s portrait embodied the psychological complexity of the events of this year. The contrast between the attractive, suburban garden and the incongruous presence of the tent as a bubble presented wonderful layers and embodied what photography should be able to do.

An Introduction to Lydia Goldblatt

We recently caught up with photographer Lydia Goldblatt, to discuss her shortlisted work 'Eden'.