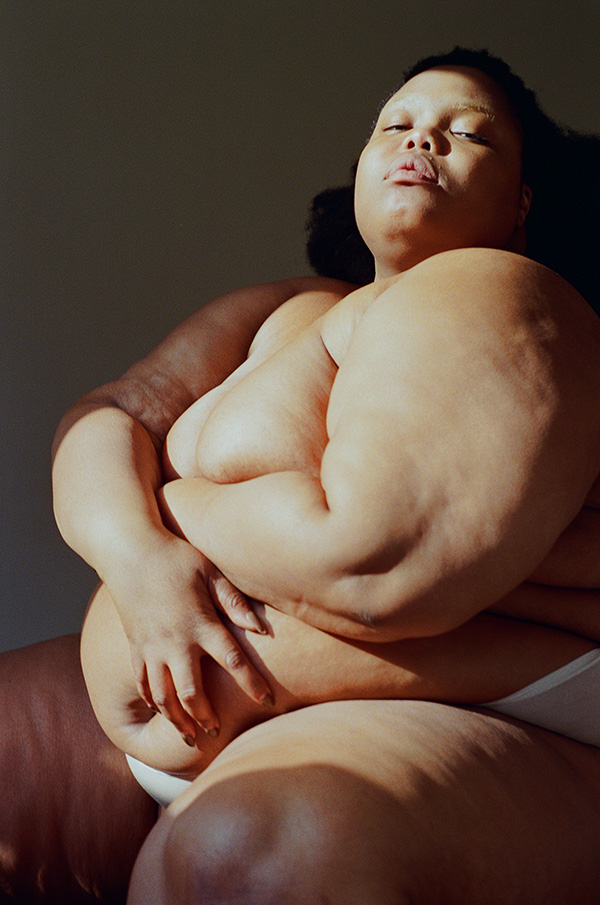 Taiwan-born Yolanda Y. Liou uses photography to explore the human body and address her own struggles with body image. Liou explains that in Asian culture, thin is often regarded as beautiful and the ‘relentless expectation of being skinny’ affected her ‘mentally and physically’ from a young age. After relocating to the United Kingdom in 2011, when she first picked up a camera, Liou began to view her body from a different perspective. ‘I do feel more at ease with myself’, she explains, ‘because of an environment that encourages you to be yourself’.

Liou was reflecting on body image in eastern and western culture when she encountered plus-size model and body positivity advocate, Enam Asiama, on Instagram. Identifying as ‘a Black, African-British, fat, queer, and femme individual’, Asiama uses her social media platform to fight for inclusivity and visibility for plus-size role models, empowering women to take control of their own narratives. Something clicked for Liou, and she realised, ‘I create images, images don’t create me’. Asiama accepted Liou’s invitation to collaborate on a photographic project, asking her friend and fellow model Vanessa Russell to participate, and the three women began a project to celebrate body diversity.

Liou works as a fashion photographer, but chose to eschew stylists, hairdressers and make-up artists, asking the two women to style themselves for this shoot, which was made using Liou’s 35mm film Pentax camera. Asiama and Russell prepared moodboards and worked with Liou to incorporate these ideas, their energy and dynamism generating a sense of creative collaboration and fun that gave the project its title, Thank you for playing with me. This portrait of Asiama was taken towards the end of the day, in the living room of her west London flat, with furniture pushed aside to create a plain backdrop to pose against. Stripped of all accoutrements, Asiama’s body fills the frame, the soft afternoon light highlighting nuances of texture in her skin. There is a feeling of honesty and directness to the portrait, softened by Liou’s tonal colour palette.

In an increasingly toxic culture of online bullying and fat shaming, Liou hopes their project invites the viewer to see beyond socially conditioned stereotypes of beauty, and to question why people feel entitled to vocalise offensive and abusive comments on social media. Asked why she repeatedly returns to the theme of the body and the female nude, Liou responds that her ultimate aim is ‘to demonstrate self-love and being comfortable with who you are in your own body’.

Yolanda Y. Liou studied at Taipei National University of the Arts, Taiwan and is based in London and Brighton. Her work has been featured in publications including The British  Journal of Photography, i-D, and It's Nice That. She was selected for inclusion in the Creative Review Photography Annual 2019, the Lens Culture B&W Awards - Editor's Pick 2018 and the 2018 BJP Portrait of Britain - Editor’s Pick & People’s Choice Award. Her commissioned fashion work includes GQ, Marie Claire and Rouge Fashionbook.

The judges responded to the strength and directness of Liou’s portrait. They felt that in pose and point of view it presented an empowering representation of her sitter that conveyed a sense of authentic identity, collaboration and trust. Formally the judges thought highly of Liou’s manipulation of light and her confident allusion to the nude in the history of art and photography.