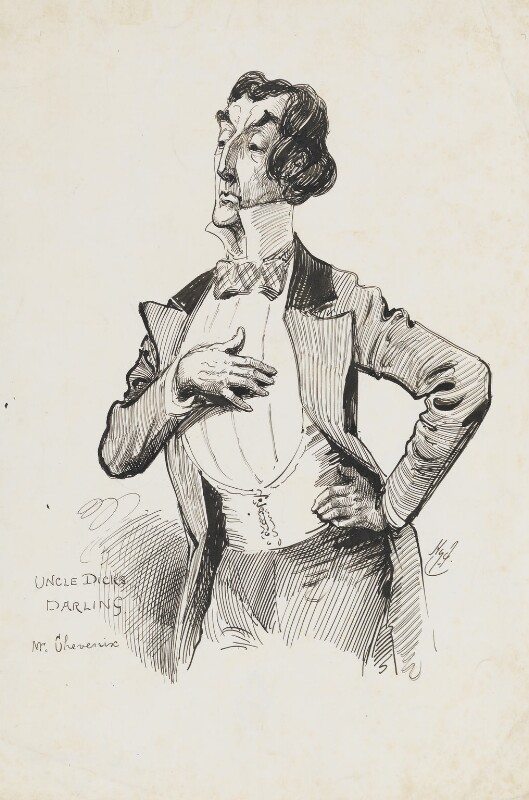 Henry Irving is shown in the part of Reginald Chevenix, ‘a cold and pompous man of business, something of a parvenu, and a good deal of a snob’. Hitherto little known to London audiences, young Irving had the lead part in a new comedy by Henry James Byron, Uncle Dick’s Darling, which opened at the Gaiety Theatre on 13 December 1869 and played until the following spring. Charles Dickens was among its admirers– Chevenix clearly owed something to Mr Dombey – and Irving’s immersive preparation for the part was praised; thus ‘his painstaking make-up portrayed what might have been a caricature of Disraeli by Cruikshank’. [1]

Harry Furniss described himself as an ‘ardent playgoer’ and was for many years on the first-night list at London theatres. [2] His caricature of Mr Chevenix, though apparently never published, is important as it appears to be the only extant image of Irving in that early London stage role. Furniss’s register of drawings records a second drawing of Chevenix but this is now untraced. [3]

NPG 6251(28) is a large and freely drawn pen and ink caricature. In it, the artist makes liberal use of the double-pointed pen down Chevenix’s left side (years later he cautioned against too much use of this kind of nib). [4]

Half length standing to left, right hand on breast, left hand on hip.

The artist; his sons, from whom purchased (through Theodore Cluse), April 1947; transferred to Main Collection, 1994.